Boyz N The Hood – “…may be timeless, but it’s a morbid criticism of our time that it has become so”

John Singleton was 23 when he wrote and directed Boyz N The Hood. Released in 1991, Boyz N The Hood is a stark look at the lives of young black men in South Central Los Angeles. It is a shocking truth that the issues raised in a film twenty-five years old still resonate today. 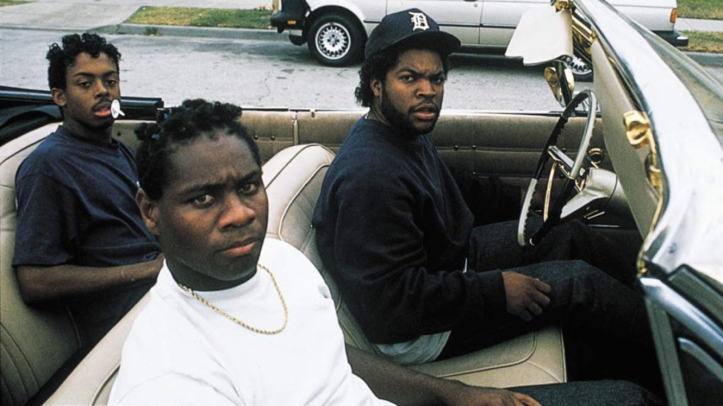 Gentrification, the struggle of a single-parent family, drug-addiction and the lack of support to pull people out of poverty remains urgent issues in American (and British) society. But Boyz N The Hood is about the black man in America. One-in-three black men go to prison and these are the same men who are stopped, searched and too often killed by police. The United States still suffers from the same brutal reality that Singleton depicted in 1991. Boyz N The Hood may be timeless but it’s a morbid criticism of our time that it has become so.

Tre is a boy becoming a man. His outbursts at school force his mother to move Tre to his Dads home, under the impression that a strong, male role model is what he needs to succeed. Tre’s Dad, Furious Styles (Laurence Fishburne) is that role model. After fighting in Vietnam (A role Fishburne played in Apocalypse Now), he believes “black men have no place in the army” and raises Tre to become an intelligent, confident young man (portrayed by Cuba Gooding Jr in a breakout performance). As friends start aspiring to get out of LA, other friends from childhood return after stints in prison. Doughboy (Ice Cube), now an ex-con, is the black sheep of the family, as his mother clearly treats him differently to the star skilled football player son, Ricky (Morris Chestnut), who Tre has been close to since childhood. But the gangs, girlfriends and pressures of South Central start to creep into Tre’s life and all the years of teaching by his father is put to the test.

Singleton consciously nods to Stand by Me at multiple points in Boyz N the Hood. The four boys walking down a train track to see a dead body definitely doesn’t have the same quirky charm the Stephen King adaptation had. The finale text, to explain where the characters ended up, equally doesn’t seem a nostalgic memory but instead reads as a depressing moment to acknowledge the distinctly different world black men have to grow up within. Embedded in this accessible, powerful tale is hints at politics and the possible reasons that create such stark differences in society. Tre’s father and mother, confidently played by Angela Bassett, are a key piece of the puzzle. The tension between these parents bubbles up on few occasions, but it expertly reveals the different approaches to Black America, without asserting a right-or-wrong to their decisions. Ultimately, a fairer society wouldn’t put such choices on its citizens.

Boyz N The Hood, viewed 25 years on, is a tremendous achievement weaving in so many key issues. The few scenes involving cops shows how destructive the force has been. They’re among the most terrifying moments in the film. Ice Cube, as Dough boy (a role acknowledged in F. Gary Gray’s impressive Straight Outta Compton last year) is pulled up on referring to women as ‘bitch’, ‘ho’ and ‘hoochie’. His weak answer reveals his own lack of thought towards his sexist language. But then Dough boy also discusses God, justifying that God can’t exist if the horrors of South LA still do. In another scene, Furious describes gentrification to the young men, and how it displaces and disrupts communities. Tre’s mother challenges Furious on his pride in child-rearing – his role as a father is to be expected and shouldn’t be considered something special.

In its unforgettable final act, Boyz N The Hood refuses to stop. We see the shooting, the carrying of the bloodied body, akin to a Pietà, and the grief and permanent damage caused to a single family. Boyz N The Hood never did stop either. The Black Lives Matter movement, and the unfathomable controversy that surrounds it, proves that the fight continues. Watching Boyz N The Hood, and Dough boys final words: “Either they don’t know, don’t show, or don’t care about what’s going on in the hood.”. We must stand united to care about what’s going on “in the hood”.

This was originally written for Flickering Myth in October 2016