A Street Cat Named Bob – “Will a cat be the cure to society’s ills? I think not.”

Based on a true story, A Street Cat Named Bob should be a sweet tale of redemption and change. It simultaneously has to precariously balance poverty, heroin-addition and homelessness with the playfulness of a cute cat and a plucky, hipster romance. 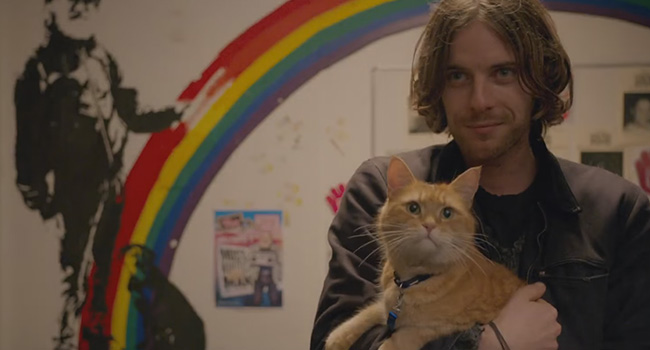 Starring Luke Treadaway as the musician, A Street Cat Named Bob is frustratingly insincere in its easy-to-fix attitude to his challenges with awkward rom-com elements that simply undermines the reality further. Will a cat be the cure to society’s ills? I think not.

Busking in Covent Garden, James (Treadaway) is a homeless addict, struggling to survive day to day. He wanders the West End in the rain and can’t escape the nightmare he lives within. Homeless friend, Baz (Darren Evans), lures him into a cosy car where James ODs on his drug of choice. Waking up in hospital, he’s helped back onto his feet by support worker Val (Joanne Froggatt) and, luckily for him, she ensures he has a home to stay within. In a flat for the first time he hears a rustle and we’re introduced to the cat, Bob (portrayed by the actual cat, Bob). A gorgeous ginger tabby cat, Bob doesn’t seem to have an owner and James takes him under his wing. Befriended by a hippy neighbour, Belle (Ruta Gedmintas), it seems as if a romance is brewing but, keeping his drug-addiction secret, we’re not sure how this’ll affect their relationship when it inevitably comes out. James and Bob head to the streets and the tourists of London take a shining to the cat. Everything is looking up for James, to the point that he may even reconnect with his Father (Anthony Head) again, as long as nothing throws him off-balance. 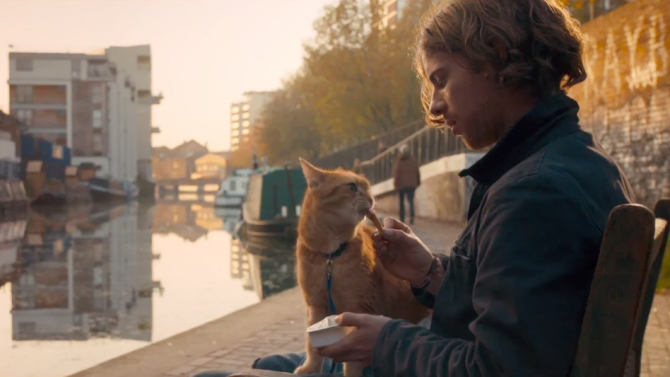 A Street Cat Named Bob [has been made because it] is a successful book. It sold one-million copies in the UK alone and has been translated into 30 different languages. A sequel, The World According to Bob, picture book (My Name is Bob), a children’s book (Bob: No Ordinary Cat) and a Where’s Wally? imitation, Where in the World is Bob? have all secured an in-built audience for this flawed film. There is an audience-pleasing simplification that is clearly at play here: Drugs are bad, families are messed up and a unique selling point, such as a cat, helps someone make money – yay capitalism! Even a brief moment to expand on these topics should at least consider the further complications of mental illness and crime – let alone the lack of funding in local communities to support such realities. But that’d ruin our love for the kind-hearted, down-on-his-luck Chris-Martin sound-a-like at the centre of the story.

The grim reality isn’t what A Street Cat Named Bob is sold on, of course. Lovingly shot, with sweet purrs and stroke-happy growls, Bob the cat is adorable to look at. Spottiswoode shoots from his perspective as James dotes on him. But, while cat-and-musician movie Inside Llewyn Davis had profound, resonant musings on the purpose of art and performance, this cat is all for show. Many will appreciate Bob more than I, but relying so much on his cuddly high-fives loses its magic over the course of the film. Stripped down, Bob and all the characters are flat and two-dimensional. Take Belle, a cloying attempt at a liberal free-spirit, she strikes against the slaughter of “farmyard animals”. We’re expected to chuckle, as James does, at her barmy interest. For someone so anti-establishment, you’d think she’d mention the enormous rise in homelessness, by just under a third since 2010, under the Conservative government.

Then there’s the final nail in the speaker. When you naturally compare him to Glen Hansard, the busker of Once in agony over his lost love, Treadaway desperately lacks the emotion and energy to enthuse an audience. In one song, Satellite Moments, the chorus seems to lift the melody directly from New Muzik’s Living By Numbers. Apart from a charming cat, A Street Cat Named Bob struggles to hold any real depth, opting for a functional, unentertaining story of hope. James Bowen, turning up in a this-is-me cameo, may find this a real treat, but others will struggle to look past the cat.

Originally written for Culturefly in November 2016