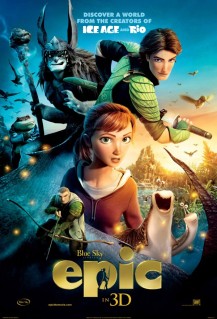 “I’m going to destroy the forest. But I’m only going to do it once, so try to pay attention”

Based on children’s book The Leaf Men and the Brave Good Bugs by William Joyce, Chris Wedge (Ice Age, Robots) directs this family-adventure with outstanding 3D and thrilling chase-sequences that are let down by a story that lacks the moral-core it clearly should have. With a Toy Story-esque “secret life” of characters within the forest, we join MK (Amanda Seyfried) as she magically shrinks and is tasked with saving the forest as a great battle is due between the Leafmen and the Boggans. It begs the question as to whether Epic live up to its name.

Down in the Forest…

A 3D production, the film begins as we see perfectly-lit, sundrenched woodland as Amanda Seyfreid narrates. We see the beauty of nature as Seyfreid tells us to “look closer… look closer…” and suddenly small birds playing in the distance becomes birds fighting against “Boggans”. This fantasy film has rules and, it isn’t long before we are introduced to the hidden world of “Leafmen” and Boggans. The stylistic, angular-jawed Leafmen are led by Ronin (Colin Farrell) and, amongst these men is Nod (Josh Hutcherson) a “rookie” leafman who fights against Boggans in the opening action sequence. The Boggans are the villains – led by Mandrake (Christoph Waltz in a villainous role that we know all-too well) who, in shades of grey and wearing rodent-attire, lurk in the shadows and – those moudly, bubble-like absesses that often cover bark? according to Epic, these are due to the Boggans as, what they touch, decays and dies. 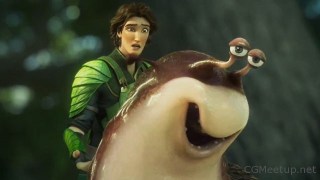 The various other characters in the forest are often interesting designs based on well-known plants – such as dandelions that, when shook, all the white petals fall from the head. The snail and slug friendship has not got the playfulness and, ultimately, strong humour that is required for these comedic-roles – and it’s not Chris O’Dowd’s fault, some jokes are simply not funny. When you imagine Timon and Pumbaa from The Lion King, whereby they were so strong they steal the show every time they are on screen, these characters do the opposite; slowing the film down (to a snails pace?) as you wait desperately for the film to move on. In another strange ‘joke’, the slug (Aziz Ansari) constantly pines over MK – and it is accepted that, as a slug, this is ridiculous and everyone in the audience laughs at him. Unfortunately, I don’t know the “rules” of the natural world of talking plants and animals, but why is the slug attracted to a human if the prospect of a relationship is impossible? Or is the comedy in the fact that fat, slug-like creatures don’t have a chance with a slim, likeable girl? 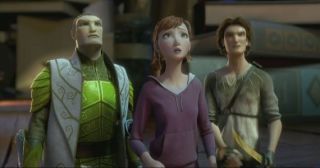 The City to the Country

Sensitively, MK – spunky, and with redhair akin to “MJ” of Spiderman – has lost her Mother, forcing her to move to the country to live with her Father (Jason Sudeikis), a crazy professor whose research is the small people of the forest (though he has yet to prove their existence). A brief mention of New York is the only evidence of this previous urban-life, which is a shame as a contrast between the two lifestyles is missing. Despite a clear moral agenda, it doesn’t go out of its way to highlight the core argument that nature is unappreciated. As an audience, we are in the forest throughout – fantastical rides through the trees and leaves are thrilling and exciting, but it could be an alien planet for all the thematic relevance. To some extent, the very fact that it is a CGI animated film means that we are well-aware that everything is false and fantastical.

The opening narration whereby we are asked to “look closer…” would resonate more if we saw depictions of real magnificent natural wonders – even depicted in flawless animation, knowing the location is real would root the film in our world and highlight the ever-increasing concerns regarding actual environmental issues that are the foundation of this story. An opening contrast between the smokey, claustrophobic streets of NYC and the beauty and space of the woodland, would only serve to amplify the importance of nature.

But it’s for Kids…

These are thematic issues that, as an adult, we rarely see in family-fun animated-adventure – though the success of Pixars films (notably Finding Nemo and the opening moments showing the loss of family and Wall-E and the dystopian world the robot inhabits) are due to brave decisions that thematically resonate throughout the film. It is ultimately a film for the family and, like Ferngully and Avatar, it will surely be a success as the many chases are fast and jaw-dropping in 3D – in fact, it is bright animated films like this that truly benefit from 3D. Add to this an incredibly touching resolution to the story – as Beyonce passes the ‘spirit fo the forest’ to another – and I am positive that children won’t leave unsatisfied. But be prepared because the screening it may influence children greatly. As the Leafmen are so small they move faster than humans and so when they hear humans, they sound aaa-lllll slo-o-o-o-o-owed do-o-oo-o-own … something that children will repeat again, and again, and again.

Originally written/published for Flickering Myth on 22nd May 2013