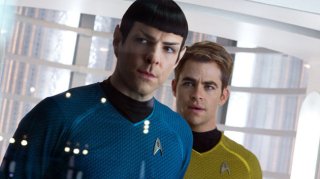 Star Trek Into Darkness (JJ Abrams/2013)
We’re back on board the USS Enterprise with risk-taker Capt James T. Kirk (Chris Pine) and logical Spock (Zachary Quinto), but this time they face off against new terrorist threat John Harrison (A scene stealing Benedict Cumberbatch) after he bombs Future-London. An opening sequence breaks a Star Trek rule as Kirk violates the Prime Directive. Indeed, this playful approach shows that this rebooted series will toy with known Star Trek lore while newbies, who’ve watched since 2009, will appreciate the explosive action. A fast-pace combined with a confident cast makes Star Trek into Darkness a strong continuation to the series.