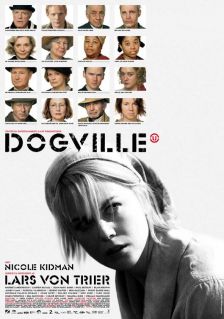 “The residents of Dogville were good honest folks, and they liked their township”

Cubism, as an art movement, can be simplified as a style that depicts an object or person through distorting perspective and space. Cubism argued that, as an artist, if you look at an object, though you might depict what is observed , why not include what is not observed,yet remains a part of the object. So, though you cannot see the opposite-perspective, there are no rules to stop you from including it anyway. This sense of transparency and an all-seeing eye is what Lars Von Trier uses to great effect in the theatrical and political Dogville.

The film is located within a single set, whereby only props and floor-markings denote where each house is located. Tom (Paul Bettany) is a philanthropist, gathering the town regularly in the hope of creating change and ensuring the development of the community. His world shifts when, late one evening, Grace (Nicole Kidman) arrives following gun-shots, promising her that the town will look after her when it is clear that Grace is being pursued by gangsters.

This vague description of the narrative does not truly demonstrate the complicated politics weaved within the story as, across nine chapters (with a description of what is due to happen), this story evolves into a perverse tale of power, corruption, abuse, arrogance and control that forces you to reflect on your own attitudes towards society. Though common-place in many of Von Trier’s films, the description of each chapter forces you to acknowledge the themes rather than dwell on what will happen next.

Alluded to in the chapter description, a moment of horrific abuse is further amplified as we see the attack from afar. The theartical bare-staging depicts a lack of awareness (or ignorance?) towards the attack – a topic that is clear through this type of production. Ma Ginger (Lauren Bacall) continues to sell her wares; Liz Henson (Chloë Sevigny) continues to gossip; children still play on the road. This single moment is as profound as it is upsetting.

Von Trier, throughout the film, manages to make similar observations and insights into the Western world, and particularly the US as the film clearly intends to provoke a discussion. In Dogville, he comments on the arrogance of forgiveness that, by definition, criticises Christian doctrine whereby forgiveness is at the core of the belief. He comments on genocide, the purposes of it and where it can emerge from. In an interview with The New York Times, Von Trier even explains how “the point to the film is that evil can arise anywhere, as long as the situation is right.”.

As part of a Lars Von Trier retrospective at the BFI, Dogville is as relevant today as it was in 2003 – indeed, maybe moreso as we now live in a world that celebrates how transparency. In education, the government will argue the changes and “improvements” on the basis that things should be more “transparent” – in the same manner as every other element of the public sector. Furthermore, the automatic response from those in power – the press over phone-hacking; politicians over expenses; banks over the recession; Starbucks and Jimmy Carr –  is a public apology for their sins. We are now in a society whereby the contradictions, deciet and dishonesty is known, and yet we continue nevertheless.

This is, ten years on, one of the most important films of the 21st Century – but be prepared to challenge yourself. Simply enough, Grace is a woman who is simply trying to do the right thing and yet she becomes a victim. As you punch in your ticket or collect your paycheck; as you work hard to live another day – think of Grace. Think of how an open-minded, generous and optimistic woman becomes twisted and destroys the world she was welcomed into.