“This is the way the world ends, not with a bang, with a whimper.“
Introduction
It is strange how some films introduce themselves to you. A Star is Born, I knew nothing about until I saw a brief clip on a documentary on Judy Garland. It showed one scene as Garland stood on stage accepting an award while James Mason drunkenly ‘celebrates’ her success in the middle of the ceremony – and simultaneously offers his own acting services to the film industry. A striking scene; it never left me – drawing me ever-closer to a viewing of the film. It was years later that I turned to it – now knowing James Mason and fully aware of the strange career-trajectory of Judy Garland herself. It is a classic tale of a young actress, taken under the wing of an established actor, and she slowly – but inevitably – supersedes him. It is a classic tale moreso as this particular version was a remake of 1937 film starring Frederic March and Janet Gaynor, directed by William A. Wellman. Consequently, it was remade again in 1976 with Barbara Streisand and Kris Kristofferson and then again, The Artist in 2011, seemed to play on the same story – though set within the silent era as the talkies took over Hollywood.

Hustle and Bustle
The film begins as drunk actor Norman Maine (James Mason) joins Esther (Judy Garland) on stage during a dance routine. This chance encounter between a Hollywood icon and a chorus member sets the film off as Maine vows to make her a star, believing in the strength of her voice. Over the course of the film we see her star rise as he loses his reputation and falls from grace (indeed, it seems Norman Maine was on his way down for a long time as his drunken-reputation on production was infamous despite charging studios a fortune for his appearance). Esther – changing her name to Vicki Lester – doesn’t play it false; we don’t believe she is with him for his money. It is a tragedy as she watches him self-destruct – her mentor and idol losing himself completely. And she is powerless to stop it.
The opening of the film alone throws you into the hustle and bustle of Hollywood – it is not all glitz and glamour. It is the multitudes of chorus members desperate to break free from the constraints of day-to-day acting alongside the arrogance of the stars and celebrities. The film satirises the industry – teasing us with the truth as Esther seems to undergo multiple changes to suit the studio. And it’s no easy road either – she struggles initially as she spends time in advertising before Norman Maine manages to convince executives to cast her in a small role. Their relationship too is the centre of the press – and to see behind the scenes of their  relationship  whilst observing the reaction of the press proves a fascinating dynamic. We see personal moments played so effortlessly with lovely, black-comedic touches such as a delivery-boy failing to recognise Norman Maine and simply referring to him as Mr Lester. 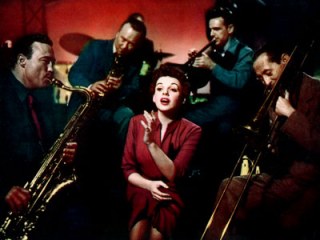 Role Reversal
It begs the question about whether the film is hinting at a gender-reversal as Judy Garland becomes the bread-winner and James Mason the tortured soul. But it sympathises too, showing Maine move into a rehabilitation clinic as he attempts to pull himself off alcohol. Friends try to stand along side him, but he fails to recognise their support – his pride always getting in the way.
The incredible sequence I first saw on a documentary, it turns out, is well-know and remains an unforgettable moment in cinema. Watching the film in full, it seems that within the scene, set at the Academy Awards, Maine mistakenly hits Vicki across the face. This moment is pure horror and summarises the deeply upsetting challenge between our lead characters – and why the film is so engaging.She loves him and will stand by him – but he doesn’t realise how strong her love is. The relatable and horrific experience of alcoholism set in the context of Hollywood.
The final act remains outstanding – he is drinking and cannot lose his pride, lying to others about the films he has lined up – it is no “Hollywood” ending. The moment Vicki Page, takes the stage to announce who she is, remains a moment that we rarely see in Hollywood – and outside of a fictional film, we probably never will.
She has no ego – she simply has pure respect for her Husband: “This is Mrs. Norman Maine”.