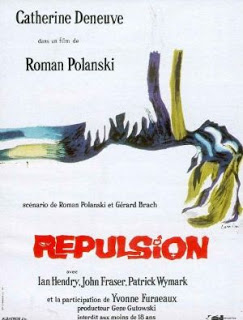 Roman Polanski remains a fascinating filmmaker to this day. Alongside Andrej Wajda and Jerzy Skolimowski, Polanski came to the fore in the late 1950’s in Poland. The BFI in London are screening all of Polanski’s films during January and February 2013 and through January, essays on separate films will be released on Flickering Myth in the hope that you too can join us in reflecting on Polanski’s diverse and ever-expanding career. Film essays will include Knife in the Water, Cul-de-sac, Repulsion, Chinatown and The Tenant.

Introduction
As an interesting starting-point, it is worth noting that Night of the Living Dead filmmaker George A. Romero insists that Repulsion is the best Horror film of all-time. To support his claim, critic Bosley Crowther claimed it is an “absolute knockout” whilst other filmmakers, namely Darren Aronovsky, cites Repulsion as an influence (and it is clear in Black Swan how it has influenced Aronovsky).  The first of Polanski’s ‘Apartment’ trilogy (preceding Rosemary’s Baby and The Tenant), it ensured Polanski would be taken more seriously across continents as Repulsion was his first English-language feature, and the fact that it made a “healthy box-office” secured financing for his next film, Cul-de-sac.
Repulsion tracks the slow, mounting madness in Carol (Catherine Deneuve), a single beautician who shares a flat with her sister Helen (Yvonne Furneaux). From the outset, she is clearly an outcast – often staring into space, losing track of her surroundings and becoming increasingly uncomfortable with the advances of Colin (John Fraser) and the confident sexuality of her sisters married-lover Michael (Ian Hendry). Sister Helen and Michael decide to go on holiday to Italy, leaving Carol on her own – whereby her madness begins to take over her life. She is haunted by the prescence of a man in the flat – nightmares whereby he rapes her in bed. Hands stretch out from walls and Carol acts out irrationally, murdering men who attempt to seduce her.

True to a recent article in Sight and Sound by Philip Horne, within the flat, Carol creates an environment that becomes grotesque – a rabbit is left to rot; a razorblade lingers in the background of scenes until the inevitable, shocking use of it. Repulsion doesn’t have the same social-conscience of Knife in the Water (Indeed, there is very little evidence to support such an interpretation) but the role of Carol, our scared-of-sex lead role is open to consideration. From male filmmakers, are they claiming that women who would turn down their advances are crazy? Are women who refrain from sex (Carol is mocked in the pub amongst Colin’s friends as a virgin) clearly missing a few cogs? Having said that, other than Colin, virtually all the other male characters are crude, sexist and sex-obsessed. The women who work alongside Carol additionally attest to the horrid attitudes of men. With this in mind, do we assume that Colin represents the rare occurrence of a man who is good – or is his singularity in the film an example of how unlikely a character truly is.
Carol’s madness is not seen as a mental-defect throughout the film – though Helen’s lover Michael does recommend medical help for her. This is a passing comment – and not the core of the film. Her increasing madness results in her attack on both the “good guy” Colin and the lecherous landlord (Patrick Wymark). Andrew Martin, in notes handed to viewers of the film at the BFI, writes that “Polanski asserts that the film is not… study of a sexual pathology, but is about … signs that someone among us is in crisis”. It is difficult, up unto that point, to agree with such a safe-interpretation. Doesn’t the unfaithful Husband Michael “save” her, almost heroically, as he carries her out in his arms? The only “good guy” is killed; aren’t we to assume he is foolish in pursuing such a “frigid” woman?  Everything argues that a fear of sex becomes a problem unto itself … until the final shot. 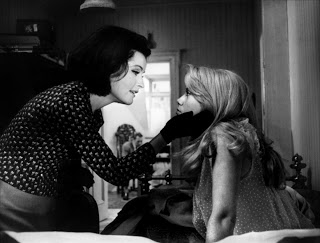 Polanski, it seems, views this film as an example of someone in crisis. It begs the question – why is Carol in crisis? What has happened to establish such a repulsion of men? The final shot shows us the family portrait. Carol, as a child, is in the centre – looking to the right, in a manner similar to her detached-gaze that she has held throughout the film (from the first shot). Follow her gaze and we land on her Father, slightly in shadow. Her mother is almost completely obscured by shadow, but it is clear she is there. The large portrait – a portrait we have seen throughout the film – includes many other family members, but in the final shot, these three members of the family are the only people who are not completely covered in shadow. Polanski seems to hint that Carol was a victim of abuse; her disgust and repulsion of men, firmly rooted in her upbringing. Her Mother, may have been aware, but she did not help or stop the situation. Her detached-gaze shows that, even at a young age something was wrong. The image from the outset of a happy family; her sister with her head gently resting on her Mother’s lap, full of smiles has no such resentment.
The use of the eye; of a razorblade; of flies buzzing around a corpse of an animal, all point towards surrealism. The cracking walls and over-grown potatoes show a mind disintegrating throughout the film – but the roots are before the film. Surrealist elements equally hint at something more than what is on screen. Interestingly, after watching Chinatown, the outcome of events is similar and, in another parallel, the ants that lay on the floor in Ida Sessions kitchen in Chinatown precede an outcome that explores Father-daughter child-abuse. Repulsion truly is a milestone in Polanski’s career – and as only the second film in his canon, you cannot help but be astonished at how confident he is in exploring such multi-layered events within such a small space and context. Polanski had truly arrived.