Roman Polanski remains a fascinating filmmaker to this day. Alongside Andrej Wajda and Jerzy Skolimowski, Polanski came to the fore in the late 1950’s in Poland. The BFI in London are screening all of Polanski’s films during January and February 2013 and through January, essays on separate films will be released on Flickering Myth in the hope that you too can join in reflecting on Polanski’s diverse and ever-expanding career. Film essays will include Knife in the Water, Cul-de-sac, Repulsion, Chinatown and The Tenant.
Introduction
Polanski, though famed for his flee of America following his own admission of guilt for sexual-assault on a minor, has been a victim himself of the cruelties of the world. A child of parents who were victims of the holocaust (his Mother killed in Auschwitz) he “saw six women shot dead and watched Poles defecate on German soldiers at the end of the war” (The Story of Film, Mark Cousins). Due to this, he was often displaced as a child and grew up intending to be an actor (appearing in Wajda’s Lotna and Pokolenie) before turning to filmmaking in 1962 for Knife in the Water.
Watching the film in 2012, you cannot help but find parallels within his work and Knife in the Water is no exception – set on a boat (Part of the “water trilogy” alongside Cul-de-sac and What?), it is claustrophobic and personal as we join a married couple on a boat trip. Suffice to say, this is disrupted as a lone student hitchhiker joins them. 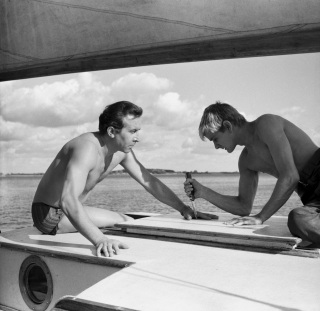 Brains over Brawn
Bookending the story, Polanski shows us the couple – Andrzej (Leon Niemczyk) and Krystyna (Jolanta Umecka – voiced by Anna Ciepielewska) in a car driving down a country road. The opening is telling as we can barely see through the windscreen due to the reflections on the surface – whereas at the end of the film, we are within the car; clearly seeing the couple without obstruction. This is a film whereby we will learn something about people and, crucially, society – a rare subject matter of Polanski, and generally attributed to co-writer Skolimowski. We observe the higher-earning husband dictating power over his wife – and then attempting to control the young student (Zygmunt Malanowicz – voiced by Polanski himself). It is not unexpected that Polanski toys with us – and creates conflict in the attempts by the characters to change this status. By the time we reach the end of the film, and see our married couple without obstruction, we still don’t see change in their lifestyle due to the events depicted. We are aware of social-injustices; but we do not act on them. The fact that the student is nameless clarifies how little he registers to those above him in status.
Despite this ambiguous ending, akin to Cul-de-sac, the set-up of a stranger changing the dynamic of the couple is a way to force everyone to consider who they truly are.  The two male-roles are characterised clearly – Andrzej is the ‘brains’, whilst the student is the ‘brawn’ – or so the judge, Krystyna believes. Even the title of the film itself serves as a metaphor as the student carries a knife – something that Andzrej claims is useless on a boat. When within the ‘world’ of Andzrej (the world of affluence; of boats and sailing, etc) – those who are skilled at trades of the hand (Construction; Factory workers; Plumbers, etc) are not valued (and believed to be unnecessary?). Andzrej is skipper – and he deems the student and Krystyna unworthy of power (to operate the boat). Indeed, he believes he is the one to lead us forward – even naming his boat after his wife clarifying his ownership of both the boat and his wife.

Life of P(olansk)i
The recent release of Life of Pi has some interesting technical parallels as both films are set within such a small space, they both portray shots and use framing to accentuate and vary the way we view scenes. Life of Pi, obviously explores the idea of deep-focus further to capitalise on the 3D – in comparison, Polanski explores the use of deep-focus magnificently, clearly owing a debt to Citizen Kane and the “triadic framing”, famously used in the snow-sequence (John Orr, The Cinema of Roman Polanski: Dark Spaces of the World).
When you deconstruct the auteur-influences (such as Orson Welles) Polanski has had, you realise how faithful he has kept to his own traditions throughout his career. The expressionistic context – blustery winds of Knife in the Water and The Ghost are decades apart, but manage to add to a sense of unease in the same manner. Indeed, the boat setting alone is tense (water remaining a feature in the vast majority of Polanski’s films) as we know the danger lurks all around them. Akin to the student, we are voyeurs ourselves too as we see Krystyna undress behind the men – and we notice the student catches a glance; he is aroused by another man’s wife. This adds further tension without drawing attention to the fact. The playful one-upmanship as the two male characters play with the knife – you know someone will get hurt. The New-Wave Jazz score and calmness of black-and-white cinematography seems to soften any danger, but visually we know danger lurks – it surrounds them all.

Directorial Debut
As a debut, Polanski manages to map out many of the tropes that will become trademarks to his style. On reflection, the very definition of auteur is established here in Polanski’s work. The sexual-tension as the lone female character wanders around in a bikini and dressing gown will spill into his films. The aforementioned use of water and subtle creaking sound-effects all appear in a different manner throughout his career. The small-scale and non-subjective perspective in Knife in the Water, connects this film with his most recent Carnage. Interestingly, though Polanski often has small-scale films, the vast majority of his films are subjective; focussed on single characters for the majority of the film. As his only Polish-language film, this is set apart from the rest – but knowing what was to come, it is a fascinating insight into a man who was simply an artist at this point in his career – and not the victim or offender of a heinous crime.