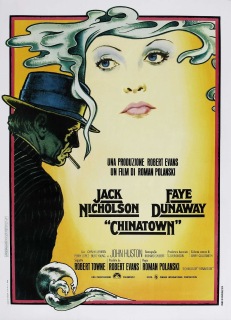 Since Cul-de-sac, many things had changed for Polanski. After one-year and half of marriage to Sharon Tate, in 1969, she was murdered – while pregnant – by the Charles Manson ‘family’. Chinatown was released in 1974 – only five years after the tragic event. It was the final film Polanski would direct in America before the subsequent sexual-abuse in 1977. This is a film that portrays his state of mind at the time – capturing a fleeting moment in his career whereby he was surely a victim to the grotesque tragedies of the world.

Crucially, ‘Chinatown’ refers to an area where Jake Gittes (Jack Nicholson) worked when he was an LA cop. It is a place, in his past, which he wants to forget. He can’t forget it – the world so “alien to the main patterns of the city that it seems part of another, ineffable geography”. Dana Polan writes how “to enter Chinatown is to leave the space of bearable rationality and personal security”. We can only imagine how Polanski’s happiness with Tate was shattered by murderers who broke into his personal home to destroy his life. Though a script by Robert Towne, there is something deeply relevant about this film in Polanski’s career at this specific moment in time…

Don’t Forget The Past – It Makes You Who You Are

Those who have yet to see the film should be aware that Jake Gittes is a private investigator; often hired to take pictures of unfaithful spouses. Mrs Mulwray hires him to snoop on her husband, only for Gittes to find that Mrs Mulwray was not who she claimed to be – and the real Mrs Mulwray (Faye Dunaway) seems to harbour her own secrets about her husband. Gittes investigates and begins to uncover a deeper, corrupted political angle whereby the cities water supply is becoming redirected to an area that Noah Cross (John Huston) intends to turn into property. It is a film that you can enter knowing nothing, because we only find information out as Gittes does – and, as a screenplay, it is one of the best (featuring in Syd Fields Screenplay: The Foundations of Screenwriting as an example of perfect script-writing).

Polan explains in his essay Chinatown: Politics as Perspective, Perspective as Politics how there are two ‘strands’ of detective stories. One whereby the plot will drive the story forward, and the events of the past are detected without damaging the events in the present. The other strand explains how the past directly affects the present – “the past reaches out and engulf the detective, to entangle him in its spell”. The latter is what Chinatown adheres to. Capitalism and authority are already established at the beginning of the film – Gittes is simply unaware of how corrupt and against “the man” these two features in his society truly are. It appears that his old colleague Liet. Escobar (Perry Lopez) represents authority; Noah Cross (John Huston) represents capitalism. Both are against him – and the film ends on a completely pessimistic note.

The very nature of identity is also explored as, from the very start, the question of who Mrs Mulwray is confuses you as to who people are. To support this, Gittes investigation leads to his own face becoming physically changed, as Polanski himself plays the role of “Man with a Knife” sent to threaten Gittes. Events and actions change who you are – Polanski’s past affects who he is as a filmmaker; victims of abuse are changed completely. Scars remain and, when you realise – as Gittes does – how sordid, corrupt and selfish humans can be, your entire outlook changes. Its not just Chinatown that is corrupt – it’s society itself.

Ironically, Polanski manages to shoot the film in a manner that verges on perfection. In high-definition too, at the BFI, the picture is sharp and bright. The intense heat of California bearing down on the characters – you can actually see each bead of sweat on their brow. How interesting that, considering the deeply cynical story explored, it is framed in a picturesque world that is Hollywood through-and-through.

Despite how much larger in scale it is, and the clear urban setting, this film still is in keeping to the Polanski tradition in many ways. In the same manner as Cul-de-sac, Knife in the Water and even The Ghost Writer, it is a 3-way story. You have Jake and his agency who are at odds with those in authority and power (Noah Cross and Liet Escobar), whilst Evelyn Mulwray has her own different angle to the situation present a three-way triangle as characters are often at odds with each other.

Furthermore, water remains at the core of the story as it is the foundations of the corrupt property purchases by Noah Cross. It is through the control of a natural, god-given right, that Gittes manages to see how even something everyone should have access to, has been controlled. Repulsion uses water almost as a coffin for the lone “good guy” in the film; Cul-de-sac has the entire castle surround by water whilst Knife in the Water is set on a boat at sea. Again, Polanski uses this element to reflect the unpredictability of nature – almost to highlight how we, are ultimately animals seeking power and dominance over others. Further to this – he says there is no God. We are all left to stew in our own filth – which we see come to the fore in the final act. 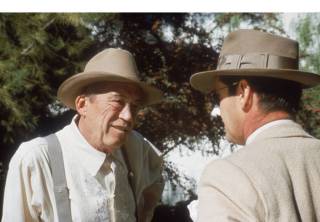 In many professions, the maxim to always “bring a solution; not a problem” is often stressed. In theory, this should ensure we continue to grow, adjust and improve – and not wallow in a place of self-pity by dwelling on the past. But there is a problem with this, as then we can ignore the flaws and mistakes of the past for the sake of moving forward – doomed to make the same mistakes. Chinatown ends as Jake has failed to protect Evelyn and fails to protect her daughter. By the final act, we know who Katherine (Belinda Palmer) is – and the true horror underneath the surface is evident. But Gittes cannot control the outcome – Noah shielding and “protecting” his daughter/granddaughter from the deceased Evelyn. Gittes is told to “forget about it”, as if that is the best solution … but we know, that this is a deeply rooted problem in LA, spreading much further than Chinatown and out into the orange groves and coast of the area.

Writing about Repulsion, and an interpretation that explores the abuse and incest within the film, this is revisited here as this is the outcome of the relationship between Evelyn and Noah. And, akin to Repulsion, it is the father-daughter relationship that irreversibly affects Evelyn. Clearly Polanski shows his anger about the abuse of families – but I think there is a very telling moment in the film when Evelyn reveals the abuse. Evelyn explains what happened to her to Jake, and he asks “he raped you…?” to which she responds by shaking her head in dismissal. This implies that she, in some respect, feels responsible for the situation. We would be very unhappy about a film that in anyway implies that a victim of child-abuse is somehow responsible – because, simply through their age alone, they are not. Gittes does not attempt to clarify the situation – arguing that she should not feel responsible – instead accepting what had happened to be the case. But these past mistakes we need to learn from – not ignore. Many of these attitudes towards sexism, capitalism, abuse-of-authority and society as a whole remain relevant. Polanski was in a dark place at the time – cynically telling us to forget about it all. We need to not forget and ensure that we reflect on these aspects of society to stop it from repeating itself.

This may be the true tragedy of the film as it hints at the sexism of the time-period – and only three years later, Polanski himself was arrested for the sexual assault of a 13 year-old girl.