“You’re tearing me apart!”
Introduction
Every family has ‘issues’. I don’t think anyone could argue that their family is perfect and, even if they did, a perfect family is so rare it is strange in and of itself. James Dean plays Jim, an older-teenager who is being ‘torn apart’ by the failings of his parents. The death of James Dean places this film within a trio of established 50’s films which he starred in, including East of Eden and Giant. His role within East of Eden is similar to the role of Jim Stark in Rebel Without A Cause as Dean plays a misunderstood outcast in both. But the actors alongside Dean in this film, supported by Natalie Wood and Sal Mineo, is what puts this film on a pedestal.
Sins of the Father
The frustration of a teenager is difficult to capture. Indeed, how do you capture the conflicting attitudes of parents? How do you portray the change in relationships as you change from a child to become an adult? All these factors come to play here, but this is a tragic tale of the outsider – and the way others can treat the people, the teenagers, they don’t understand. Values change and parents are generations detached from their children. Jim Stark (James Dean) is constantly moved between towns as his domineering mother (Ann Doran) and reluctant father (Jim Backus) try and find a place where Jim will make friends. This is revealed a short-way into the film after a sequence that finds Jim drunk on the streets and picked up by the police. 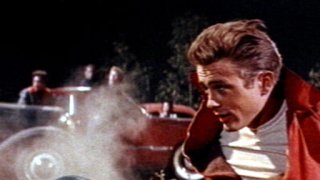 His frustration is clear and we can see his parents failing to understand the issues their child is tackling. Within the same police station, Judy (Natalie Wood) has ran away from home, albeit briefly, after an argument with her father. Plato (Sal Mineo) has killed small puppies – and won’t explain why. The three are linked in their ‘outsider’ role in society
Fitting In
The first act is primarily Jim attempting to fit in. He attends ‘Dawson High School’ and is soon bullied by a group led by knife-weilder, Buzz (Corey Allen). The sequence culminates in the death of Buzz as he fails at a game of ‘Chicken’. This horrendous moment is shortly followed by the connection between Plato, Judy and Jim becoming firmly established – they had only met in passing at the police station; this event brings all three together.

Homosexuality
The death of Buzz signifies a change between all three characters as Jim and Judy begin a relationship, whilst Plato looks on in vain. Many sequences place Plato and Jim exceptionally close to each other and sequences play almost as it would in a romance.
Roger Ebert states in his own analysis:

“After Buzz dies when his car hurtles over the cliff, the students all seem curiously — well, composed. Jim gives Plato a lift home and Plato asks him, “Hey, you want to come home with me? I mean, there’s nobody home at my house, and heck, I’m not tired. Are you?” But Jim glances in the direction of Judy’s house, and then so does Plato, ruefully”

Plato is portrayed as a boy without a family (or a family who disown their ‘unconventional’ son?) and a brought up by an African-American maid (Marietta Canty) further highlights his outsider status – and how the maid, perhaps, relates to an injustice in his treatment. Indeed, it is this maid who is the final clear, profile shot before the camera pans back.

There is clearly a mixed, unclear message as Plato is obviously not revealed or considered to be gay – but it is the acceptance and love shown from Jim and Judy that reveal his acceptance in his friendship group, despite his clear affection for Jim.

The Real Rebel
Many men have claimed that they had intimate relations with James Dean, and it is rumoured that Nicholas Ray was bisexual despite multiple marriages – so this subtext is striking at a very personal issue that perhaps Dean and Ray related to. Simply by making this film they were making a point – and now it will be forever heard in the hallowed halls of classic 50’s cinema.
A great film that represents the middle-class teenagers in a way that, prior to this film, had rarely been seen. The mothers and fathers whose treatment of their children was ignored for the sake of their own pride. Jim constantly questions his fathers masculinity, whilst Judy’s father is finding it difficult to contain his attraction to his own daughter – these are strange situations that we are led to believe are regular and normal.
These teenagers in the mid-fifties clearly were facing a change – the sixties had not begun, yet these teenagers would be the adults who would change the face of history forever.