“Nobody commits a murder just for the experiment of committing it. Nobody except us”

As the BFI celebrate Alfred Hitchcock with many months of screenings including all his esteemed ‘classics’, I felt it was only right to revisit one of my personal favourites: Rope. Prior to 2008 I had seen very few films of his films and Rope was one of the earlier films I saw of his that left me feeling frustrated at the state of cinema today: Why aren’t more films made in this manner? Why aren’t characters as interesting? Why aren’t stories and narrative techniques as innovative?

Through the purchase of widely available boxsets, I managed to watch many more of his finest films: Vertigo, Pyscho, Dial M For Murder, North by Northwest. Time and time again, the same feeling.

If you are at this point in my analysis, then clearly you must value the genius of Hitchcock and those who are frightened to venture back prior to 1977 should take a good look at themselves because, I tell thee, the reign of Hitchcock will never return and we should be glad that these are availabel to watch. No one has made films of a better, consistent, standard. 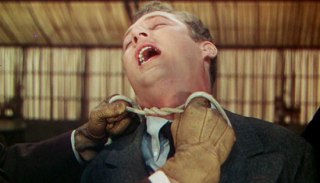 Akin to Russian Ark, Rope attempts to show an entire feature-length film in one take. There are two definitive cuts (minor cuts on the grand scale of things) and eight semi-seamless cuts as the camera ducks behind an actors back, then the shadow changes ever-so sligthly, and the camera continues to move. Not perfect but this was 1948 and film reels could only show a certain amount of information. Roughly 10 minutes apparently.

The plot revolves around two students: Brandon (John Dall) and Phillip (Farley Grainger). They decide to ‘kill off’ a fellow student David Kentley. Shockingly, we see this as the film begins – the opening shot showing Kentley’s open mouth as the last gasp of air leaves his lungs. As soon as they have killed him they plan to hold a party with his family and loved ones assuming nobody could ever suspect them as the killers. When David’s time of death is worked out, everyone will say “oh yeah, we were at Brandon and Phillips [30-minute] party so clearly they aren’t the killers”. This is delivered in impeccable English – the upper class never had it so good.

Unfortunately Brandon has a little darkness in him. His cat-like eyes and tone of voice are unsettling. He discusses with David Kentley’s father how ‘Murder is okay’. This playful approach is what Hitch enjoyed creating – murder and black-comedy, hand-in-hand.

Writer, Arthur Laurents, felt that David’s death should not have been shown adding an extra layer of tension as the audience would question whether they killed him or not. I have a funny feeling that on the first watch without the audience seeing his death, it just seemed too clear. Brandon is clearly psychotic, whilst Phillip is clearly cracking under pressure. The tension is if these too well-educated young men will ‘get away’ with the crime. A feature of many Hitchcock films – will the Strangers on a Train plan work? Will the Dial M For Murder plan succeed? Hitchcock always explores the fascinating possibilitiy of the ‘perfect’ murder.

The Theatre and it’s Influence

One thing that I find fascinating about British films of the 40’s is how they are clearly influence by the theatre – and Rope is no exception. Hitchcock wanted us to watch it as we would watch a play, whereby it is uninterrupted and, akin to The Mousetrap, has an unexpected finale. Dial M for Murder, based on a play too, used 3D to create a more ‘theatrical’ experience. In Dial M For Murder  the 3D was used so that you would often look up to the characters, as if they stand on a stage. I think the only film I can recall, based on a play and recently released, is Polanski’s Carnage – a film I greatly enjoyed as it really harked back to the theatrical experience, basing the whole film within an apartment. With regards to 3D, its comforting to know the Dial M For Murder has gained it’s re-release in 3D already, with screenings in the BFI. 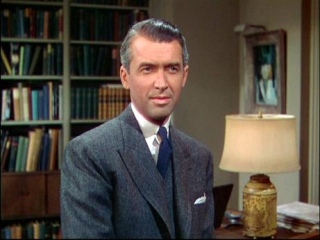 Guest of the Party

Jimmy Stewart portrays ‘Rupert Cadell’. He is a lecturer who Brandon and Phillip adore. He has discussed with them the Nietzsche ‘Superman’ attitude and the ‘Survival of the intelligent’ (that the intelligent should prosper, weeding out the ‘less-useful’ humans of the world). To Rupert, it is merely conversation. Unknown to Cadell, like Nazi’s, Brandon and Phillip twists it out of context completely and decide to try and kill off, who they believe, is one of the ‘weaker’ members of society.

Until Rupert arrives, the film is mildly entertaining, but you are full engaged to the film once he walks on set. His entire persona, attitude and conduct surpasses every other character. Not only is it Jimmy Stewart prescence, but the character is aspirational – he is intelligent, funny and clearly enjoyable company. He treats everyone equally – including the maid, whom Phillip seems to dismiss very quickly – which is strange considering how Brandon believes that Cadell may even support their plan.

The most socio-political factor to finish surround the relationship between Brandon and Phillip. Like Rebel Without A Cause, this film is ‘clearly’ about the homosexual relationship between the two lead characters. Even though it is briefly mentioned that Brandon dated Janet (before Kenneth, before David…), it is clear this simply keeps the censors off their back. Janet could be a friend, or she could be Kenneth and David’s ex-girlfriend. Her past with Brandon does not alter the plot in the slightest. Writer Arthure Laurents seems to indicate that not only are Phillip and Brandon in a relationship, but Jimmy Stewart’s ‘Rupert Cadell’ is gay too and was probably in a relationship with one of the murderers. This homosexual context is also another connection to the historic Loeb-Leopold case, whereby the two men were in a relationship themselves, before murdering a 14 year old boy. Other similarities between Rope and this case include how the two were wealthy Chicago law students. The two were motivated by a “desire to commit the perfect crime”.

The techinical skill behind managing the camera is fascinating to see whilst Stewart’s performance is throughly engaging. John Dalls arrogance and Farley Graingers ‘I-can’t-hold-a-glass-without-breaking-it’ attitude may be a little cliche, but the uniqueness of the film still stands and if you are new to ‘Classic Cinema’, I can only beg you to watch this film. Once you watch one Hitchcock, you’ll be desperate for more…

Originally written on 16th May 2009, but significant changes have been made for this article