“I’m not a drinker; I’m a drunk.”
Introduction
Film is an art form and, like any other art form, the content can be challenging. I watch many films that explore themes which are bleak and depressing by their nature. This is not to say that a film is not engaging and interesting – but that the content and themes explored are difficult to discuss. A film about insomnia can be slow-paced and moody, but that doesn’t mean it is any less engaging (Christopher Nolan’s Insomnia would be a good example). A film about the monotany of war, and the exhausting-fight soldiers go through to achieve victory may be tough to watch and repetetive in its nature – but that doesn’t make the issue less relevant and any less important (I think of Malick’s The Thin Red Line).
With this in mind I bring you Billy Wilder’s The Lost Weekend. At a-scratch over 90mins, the film portrays a weekend in the life of Don Birnam (Ray Milliand) a writer who is a clear alcoholic. Though a pessimistic and tragic story, this film was the first to portray alcoholism in its brutal form. Prior to this, Philip Kemp writes, “drunkards in Hollywood movies were mostly figures of fun” and The Lost Weekend portrayed alcoholism as a sickness, even a psychopathic-tendancy as Birnam describes himself as ‘two’ Don’s. The film rested on the shoulders of Ray Milliand in the role of Don Birnam and he managed to bag an Oscar for his portrayal. This truly was ground-breaking filmmaking. 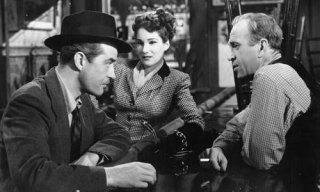 Those Who Support
The film begins as Don and his brother Wick (Phillip Terry) are packing for a weekend away. Wick mentions many times how “after what you’ve been through…” this weekend should be a well-deserved break. At this stage Don hasn’t had a sip for ten-days… but it is clear this is temporary as he desperately attempts to nab a drink from a bottle he has hidden. We then meet Helen (Jane Wyman), his lover of three-years. She is planning on joining the two brothers later on… but this is changed early on. We realise that Don is so desperate for drink that he changes the plans and stays in New York. He then steals a little money put-aside for the landlady so that he can buy a “quart of rye”. Within 20 minutes, he is in the local bar, whereby barman Nat (Howard Da Silva) shows his shame in Don but still serves him as Don has cash in-hand.
A range of characters show how everyone is supporting Don – not one person condones his alcoholic lifestyle. But he still craves his drink. It would be more impressive to imagine the context of the 1940’s, whereby alcoholism was not seen in the same manner as it is seen today. As noted, it was rarely portrayed in Hollywood as the illness which is presented here. Scott McGee writes for Turner Classic Movies that the timing of the film was perfect as it appeared “at the nation’s theaters just as World War II [was] wrapping up”. This is important as thousands of soldiers turned to alcohol to “drown out the din of combat and the loss of former comrades who did not return from the front.”
Don Birnam is depicted as an intelligent, skilled writer. When we first see him, he appears to be tackling his problem well, but it goes downhill from that opening scene. Audiences could understand and, in many cases, relate to the character portrayed. He is not a bumbling fool or a vagrant, stealing from everyone. He could be your brother, your lover or your neighbour – or your work colleague.

Indeed, another opinion about the content of the film is direct from Wilder’s experiences himself. Billy Wilder was not known as an alcoholic himself, but when working on Double Indemnity, he worked alongside Raymond Chandler, a recovering alcoholic. Andrew Brown writes for The Telegraph “The two did not have an easy relationship and, to make matters worse, Chandler was an alcoholic – a severe case.”. With this in mind, Wilder apparently wrote The Lost Weekend for Chandler himself – as if to make a point.
Billy Wilder-isms and Influences
Suffice to say, this film is littered with many themes, techniques and ideas that Wilder has found himself come back to. Wilder has always been a writer himself when directing, so the stories are often revealing about his attitude. As discussed, this seems to depict a character who is similar to a friend of Wilder. In addition to this, like The Apartment, Double Indemnity and Sunset Blvd, the lead role is male and has an ambiguous moral-compass. Don is an alcoholic, but we are interested in him because we care about him and feel like he may tackle this demon within.

The use of language is also in the vein of Wilder’s writing. In The Apartment, Lemmon’s ‘C.C. Baxter’ has a habit of always using the term ‘-wise’ when describing. For example, he says ” Kubelik-wise” and “Cookie-wise” at different points in the film. Other characters pick-up this trait a little too. In The Lost Weekend, bar-fly Gloria (Doris Dowling) often abbreviates terms which are not normally abbreviated – for example saying “ridic” rather than “ridiculous”, “mench” instead of “mention” and “def” instead of “definately”. This is such a great, stylised way of writing that it is clear that Wilder must’ve known how he could be setting trends. Or at least trying to create trends.
In addition to all of this, Wilder has chosen a context which is incredibly dark. It is worth noting how The Apartment touches on suicide, despite how light-hearted the film may appear. Both Sunset Blvd and Double Indemnity have their own share of ‘murder’ narratives. The Lost Weekend is much more clearly a darker story, but it gets more horrific in the final act as Don wakes up in an alcoholic ward. He witnesses patients lose their minds as they believe beatles and insects crawl on their bed while they sleep … before he starts losing his own mind when he see’s a mouse appear in a wall before it is attacked by a bat. This is incredibly unsettling and forces you to acknowledge the severity of the condition – and more importantly how if affects others and the health service. 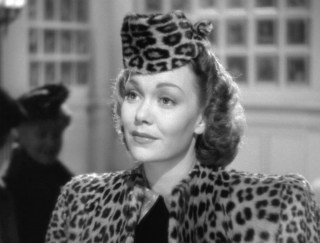 The Final – and First – Shot
Citizen Kane begins and ends with the same shot. “No Trespassing” the sign reads as the camera, through a series of fades, step-by-step moves into the fortress Xanadu. As the film ends, and we realise what ‘Rosebud’ means, the film shows Xanadu again, and again, through a series of fades, returns to the ‘No Trespassing’ sign.
The Lost Weekend, in the same way, manages to bookend the film with the reveal/exit of a location. Predating Hitchcock’s Psycho and Rope, the film opens on a city-scape before panning across to the open window to reveal Don Birnam. In the same way, the film ends as Birnam decides to write a story about the weekend, starting at that very moment. By moving from the ‘small-scale’ story of Birnam in his apartment to reveal the cityscape, it is as if to say how this story is much bigger than Birnam. Again, consider the opening of The Apartment whereby C.C. Baxter works amongst the hundreds of other workers in the office. Or, further back, to the opening (and ending) of King Vidor’s The Crowd, whereby characters are revealed as amongst hundreds, if not thousands of people. Wilder is telling us that alcoholism is not limited to Birnam – indeed, it is rooted in society and we have a duty to acknowledge it and support those in need of help.