British audiences of a certain age will know Billie Piper from the halcyon days of late-nineties pop music. But she has redefined her image with the outstanding Rare Beasts. Starring, written and directed by Piper, this is a blackly comic, fast moving, surreal collage of a movie that feels like an extended episode of Fleabag with less laugh-out-loud gags and darker, acutely observed criticisms in their place.

Rare Beasts could be on stage, with a limited cast and a tight network of events, that could be restructured to utilise a theatrical space, but it belongs on the screen. Blurring the boundaries of reality and truth in an urban, London setting, with characters who are difficult to like; these can only be captured by the intimacy of a film camera.

Mandy (Billie Piper) is at a meal. The partner opposite, Pete (Leo Bill), is shockingly open about his state of mind and Mandy responds in kind. It is a vicious exchange of words that distorts the line between life and their inner-most thoughts. Are they truly saying this in a restaurant? Her mother (Kerry Fox) is sick, suffering from cancer, while her drunk and argumentative Dad (David Thewlis) seems to only appear to make their suffering more difficult. Her son, Larch (Toby Woolf), is suffering from a tick himself, drawing all the unwanted attention it can bring. It is not helped by a habit of switching to anger at the drop of a hat, screaming and shouting at his mother – and Pete – in the most public space. We see Mandy and Pete’s rough relationship where their broken dreams and frustrations with approaching middle-age bubble and explode to the surface time and time again. Pete, for example, clearly doesn’t know the first thing about children – but he does seem to slowly learn. 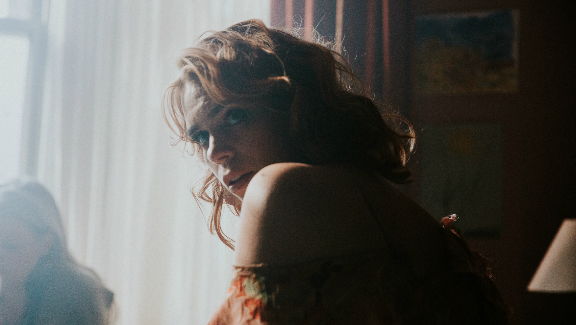 But this isn’t a romance in the traditional sense of the word. If there is someone Mandy needs to love, it is herself. As trite as that sounds, her inner voice and vocal mantras that she uses is revealed in all the men and women she sees. That we can hear her thoughts, is another Fleabag note that some may feel borrowed. But the biggest departure is how Piper directs. She creates a busy canvas with varied textures and constant movement. A wedding manages to begin as the awkward family observe the dance floor and slowly, one-by-one, they are drawn into the space, occupied by rave music and a moment of release that we can all relate to. But everyone is cracking, challenged by the world and the pressures that bear down on them. They are desperate to try and forge their own path but are restrained by their own insecurities and challenges. Pete and his outbursts; his sense of duty; the expectation to “be a man”. Mandy, and the expectation to “be a woman”, settle down and get married. Neither know a solution – and they are sick of the unrealistic and dull husband-and-wife dynamic that doesn’t seem to work anyway judging by most people they meet.

Rare Beasts in deep contrasts, and dark shadows, by cinematographer Patrick Meller is grimy and dirty. The pristine glass and grey offices are corporate and flat against the homestead. In a constant state of flux, with bags cluttering the floor and yellow cupboard doors falling off their hinges, the home is literally falling apart. When we are on the ground, we can turn to anyone for some form of support to hold us up. But Rare Beasts refuses to give a traditional conclusion and despite a growing relationship at its core, it is wholly untraditional in the story it is trying to tell.

Vivid, smart and refusing to compromise, Rare Beasts secures Billie Piper as a vital voice in British filmmaking and her future in cinema looks incredibly bright.

This was originally published as London Film Festival coverage for Culturefly.co.uk in October 2019