When The Lego Movie was released, we were pulled in by the nostalgia loaded into its DNA. When The Lego Batman Movie appeared, our fascination with comic book heroes and the spoofing of our caped crusader charmed us entirely.

The Lego Ninjago Movie, on the other hand, is selling something quite different. Cynics might highlight how Ninjago, a line of Lego toys spawned from the Ninja Lego series in 2011, is a shameless 95-minute advert for toys. While there is truth to this, the reality is every Lego movie is a conscious cash-grab for the legendary toy company. Thankfully, the excitement, sense of fun and intelligent morals that made The Lego Movie and The Lego Batman Movie so much fun, is woven into the fabric of The Lego Ninjago Movie.

Lloyd (Dave Franco) is the son of Garmadon (Justin Theroux), a four-armed super-villain intent on taking over the city of Ninjago. Thankfully, Garmadon has never managed to even come close due to the combined efforts of the Secret Ninja Force team, of which Lloyd is part of. A combination of Power Rangers and Captain Planet, these colour-coded, superpowered teenagers are high-school kids by day and skilled warriors when evil attacks. Their mentor, Master Wu (Jackie Chan), explains to the team that their current fighting style is merely the start of a longer journey and they will be required to upgrade to take down Garmadon. Of course, Lloyd has his own demons to contend with, as his personal need for a father cannot interfere with the Ninja’s plan to defeat Garmadon.

Unlike the knowing winks of the prior Lego films, The Lego Ninjago Movie expects us to buy into a brand that only Lego enthusiasts would be acutely aware of. In fact, the film begins in live-action form as a child wanders into Jackie Chan’s curious store of obscure artefacts. A mogwai would not be out of place in this establishment. But, as we have seen in The Lego Movie, there are two worlds contained in this universe. The real world and the creative, eccentricities of the Lego world. The rules in the Lego world can be broken. Krazy Glues can become dangerous weapons and a head can be connected to feet to pull two sides of a city together. The Lego Ninjago Movie,wonderfully, uses this playful, unique Lego universe trick, to great effect with the “ultimate weapon” – a real-world object that unleashes havoc in Ninjago city. 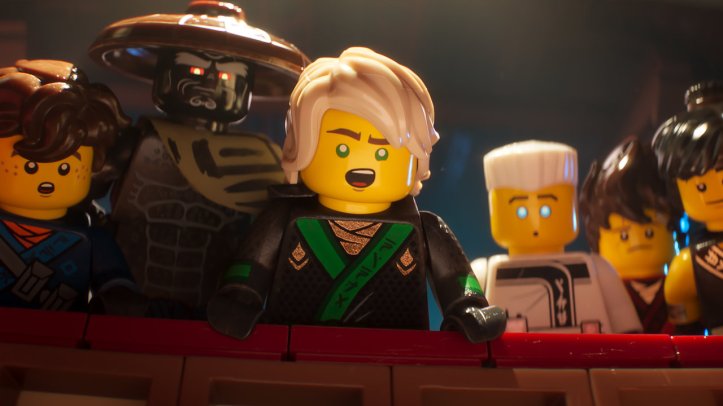 Garmadon’s well-known intentions does strike a parallel with The Joker in The Lego Batman Movie. In fact, the frustration of the citizens in Ninjago is vocalised in the same way as when Batman is forced to acknowledge how Gotham remains a criminal hot bed. After an attack on the city, Garmadon skulks back to his volcano lair in the same manner as The Joker did to get away from Batman. Considering this is the third lego film, and they clearly operate with an effective formula, combining fourth-wall-breaking comedy with an awareness of cinematic cliches, we wonder if it has already reached its peak. Let’s hope not.

Between a perfectly-timed Fuscia Ninja joke and the use of a jazz-flute playing ‘Hard Knock Life’, The Lego Ninjago Movie manages to bring to the table the same tone and energy of its enormously successful predecessors. The scratched plastic and detailed textures truly bring these likeable characters to life, with a warm, sensitively handled moral to the story to top it off. While there may be a trend of each Lego movie being inferior to the last, we’re still very comfortable and on the right side of entertainment in The Lego Ninjago Movie. If you thoroughly enjoyed The Lego Movie, you will enjoy this spin-off too. But the Lego team may need to rethink their approach as the formula for fun may be running low and require a little topping up.

This was originally published for Culturefly.co.uk in February 2018