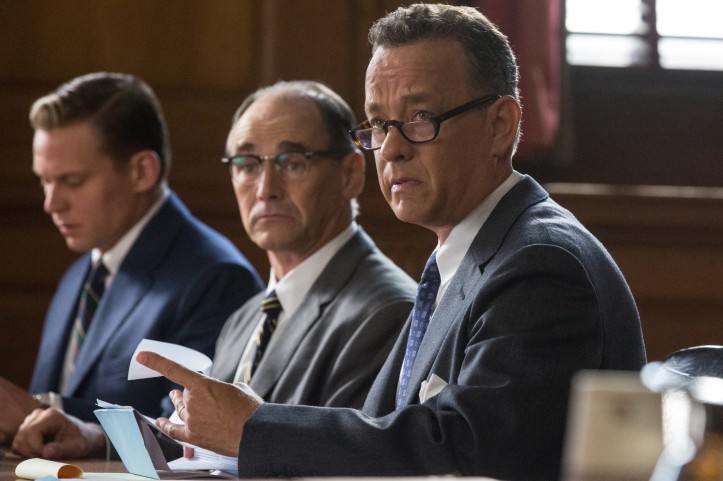 Tom Hanks suits the trilby hat and long jacket. Wearing the same attire as he did in Road to Perdition, his tall stature and calm presence demands our attention when accentuated by a sharp hat and a draping cape. Spielberg has turned to Hanks on four occasions since Saving Private Ryan because of this strong ‘Standing Man’ persona. Bridge of Spies takes place in the middle of the Cold War as US and Soviet spies exist in their opposing territories. Lawyer Jim Donovan (Hanks) is defending Rudolf Abel, played exquisitely in military mysteriousness by Mark Rylance. Almost as two separate parts, the first half is a court drama, primarily in America, until the film shifts to Berlin for the second half. This transforms Bridge of Spies into a political spy-movie. Spielberg knows how to craft a story by teasing tension with mesmerising characters. Rylance and Hanks’ chemistry is palpable, and though we understand the limited opportunity for conversation, it’s a shame they’re not on screen more. Cinematographer Janusz Kaminski, yet again, delivers an exceptional visual flair as we relate to the warmth, and safety, of the home that Jim leaves behind and fear the windy uncertainty of Berlin, blurring everyone’s vision. It’s a tricky plot, balancing military protocol with our own sense of humanity, not unlike Kubrick’s magnificent Paths of Glory. Bridge of Spies challenges our senses, and observing the refugee crisis in Europe, surely our humanity should be at the forefront of our minds, as it was for Donovan.