A Room with a View – “A beautiful world, whereby love and romance dominate…”

Merchant Ivory productions were renowned for period films including Howards End, Maurice and A Room with a View. The latter boasted a cast that would become icons of the British film industry, including Helena Bonham Carter, Judi Dench, Maggie Smith and Daniel Day Lewis.

Based on the 1908-published E.M. Forster novel of the same name, A Room with a View has the balance of taking place between two mesmerising locations (The beauty of Italy’s Florence and the quaint Kent country) and providing characters that are instantly likeable and a pleasure to be around.

Lucy Honeychurch (Helena Bonham-Carter) takes centre stage as the young, curious woman who is chaperoned by her Aunt Charlotte (Maggie Smith) on a jaunt to Florence. She meets the two Mr Emerson’s, Father (Denholm Elliot) and Son, and it’s clear that an unspoken connection has sparked between Lucy and the son, George (Julian Sands). With the splendid backdrop of Tuscany, and a free-spirited novelist (Judi Dench) to accompany them, Lucy and George eventually meet in a field and share a passionate kiss, before Lucy is called away by her Aunt. Never to be spoken of again, Lucy returns home to Kent and is asked for her hand in marriage by culture-snob, Cecil Vyse (Daniel Day Lewis). Her entire life is clearly mapped out and her own conflicted feelings towards Cecil, she assumes, is temporary. That is until the two Mr Emerson’s move to the village, and Lucy can’t hide her feelings for George – and George can’t hide his either. 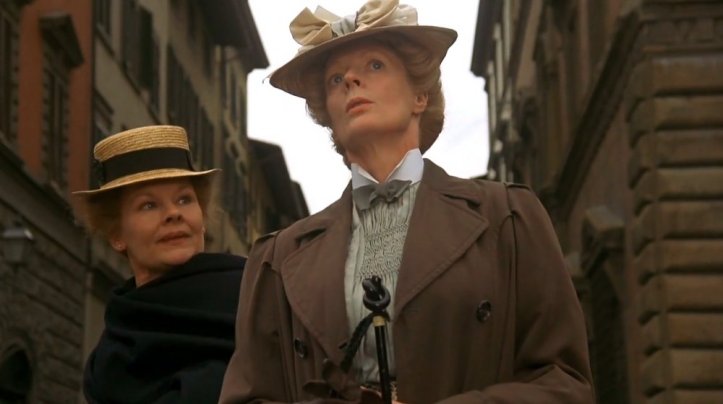 “Beauty! Truth! Love!” shouts George at one point. He is an eccentric fellow, quiet and reserved initially, and then outspoken and bold after meeting Lucy. The fact that he falls for Lucy is no surprise as Helena Bonham-Carter is undeniably mesmerising. Her round, innocent eyes and tiny lips create that perfect contrast between cherubian features and womanhood. Julian Sands too, with his floppy blonde hair, seems to have the presence of a mythical Roman hero. The chemistry between the two, with very little conversation and only fleeting moments of passion, is simply sublime. They resonate the erotic urges buried beneath the laced, fully-covered, multi-layered clothes of the Edwardian period.

Of course, beneath the chaste romantic relations, the sexual frustrations also alludes to repressed sexuality. Cecil, is directly challenged on his lack of interest in “a woman”. Something, he agrees, is accurate. In the context of the era, the lack of clarity gives the impression that perhaps Cecil is just not interested in this woman in particular, but I think the screenplay (by Merchant Ivory regular Ruth Prawer Jhabvala) is clearly hinting at his own true urges. This is also applicable to Mr Beebe (Simon Callow) too, a grinning local vicar, all too keen to bathe with the young men. Desperately pulling off his clothes, he’s happy to wrestle and chase the naked men around the pond.

A Room with a View is a notable touch-point for British period dramas. This is the type of film that international audiences expect from a British production, especially a production company as iconic as Merchant Ivory. Crucially, every character is thoroughly engaging. Whether it is the blunt Mr Emerson, happy to be kind rather than politically-correct, or Freddy, Lucy’s open-minded brother, happy to criticise the class prejudices of his family. Daniel Day Lewis becomes a pointy, pompous critic while Helena Bonham-Carter melts your heart. Even Judi Dench and Maggie Smith have a pre-The Exotic Marigold Hotel holiday adventure. She’s aware of her pretentions but is nevertheless a strong woman, keen to confront the men of her life. A Room with a View takes you away to a beautiful world, whereby love and romance dominate the lives of the wealthy. It’s obvious why this type of tale (Downton Abbey, Far from the Madding Crowd recently) is one of British cinemas biggest exports in filmmaking.

BFI LOVE runs until 31 December 2015 at BFI Southbank and various venues across the UK. To find your nearest LOVE event visit www.bfi.org.uk/love.