There is a moment, on the tube, as Billy (Charlie Creed-Miles) begs for change. A girl, with her friends, cannot assist and as Billy continues down the train we see the roll of her eyes. 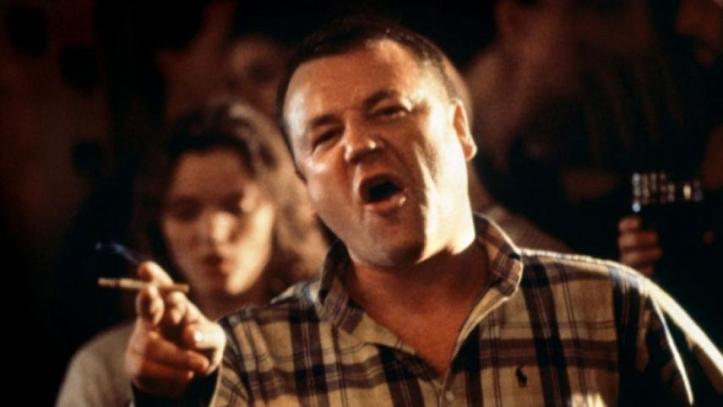 In 2015, nearly 20 years after Gary Oldman’s directorial debut, Nil by Mouth, we still see this poverty and desperation on the trains. The eternal conflict as we choose not to support, against our instincts, as “we know where the money will go”. What is so effective in Oldman’s brutal film, is how we know intimately the family, friends and background of Billy. We also see his sister, Val (Kathy Burke) bullied by her husband, the thief and thug, Ray (Winstone). Nil by Mouth, without pointed criticisms manages to touch upon the conflict of poverty and crime, of family and future, with such sincerity and respect. This isn’t an attack on criminals – this is the vivid recollections of childhood.

Partly autobiographical with regards to Oldman’s own background, Nil by Mouth is set on the streets of London. Ray, Mark and Billy are introduced as they meet in the local pub. Booze and shots are flowing – they are alcoholics – as the mums, wives and friends sit elsewhere. These men are in their habitat whereby stories or orgies, drugs and ‘fuck’ and ‘cunt’ are all par for the course. In fact, the latter two words seem to make up a large percentage of their vocabulary. A night on the town for the boys consists of beers, punch-ups and strips clubs but the following day reveals the darker side to the lads lairy endeavours. Billy nicks Rays drugs and is met with an animal, as Ray sinks his teeth into his nose – a scar of his war with the alpha-male. Billy’s story continues as he begs for money from his mum, who can’t bear to see her son in addictive agony. Every grim detail of shooting up on heroin is exposed, with a change in contrast forcing us to acknowledge the sharp prick of the needle. The older parallel, Ray, on the other hand is a destructive force. A constant rage that fills the room with fear. Val, finally with a smile on herself as she plays pool, peaks his anger as, when home, Ray violently attacks her within an inch of her life. Their daughter, sitting on the landing, hearing the event play out. 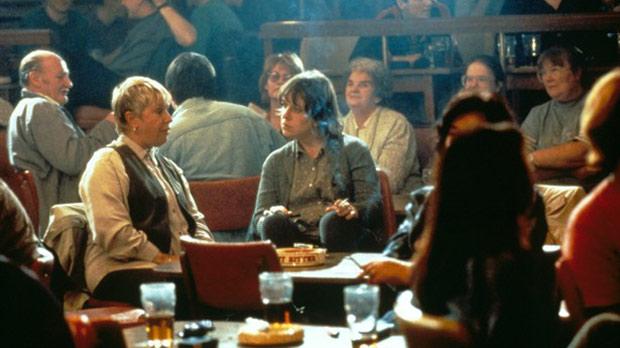 In 2015, Laila Morse is better known for her long-serving role in Eastenders as Mo Slater. Her first acting role, at 52, is in the maternal role of Janet, in Nil by Mouth. She’s the glue the binds the group together. She reluctantly funds her son’s habit and can go toe-to-toe with Ray when he’s bordering on abusive in the household. Her tired frustration reveals so much. She can’t lock Ray up or force Billy to go clean – and sadly, it seems, she can’t pull Val away from her explosive husband. But she shows love and support. She is there for them when others aren’t. She’ll put Billy up when Ray refuses to. She pops over for a cup of tea to see Val – and she’s her lifeline to force change on the status quo. Janet looks after the aging grandmother too, who represents the same character, thirty years later by singing ‘Can’t help loving that man’ in the local club. Janet silently sings the song herself as she has heard it so many times before. Despite Ray and Billy’s corrupted, selfish perspectives, Janet has clearly seen their kind before too. This is nothing new.

Indeed the parallel between Billy and Ray is clear. Unless it’s smooth dirty jazz or Eric Clapton’s score, hypnotically humming beneath the surface, Gary Oldman often uses television as background noise in the cramp flats. The period drama Nan watches or Apocalypse Now, in the drug den. Men and women seek escape from this life of mental illness (depression, alcoholism, drug dependencies, etc) which, in turn, hurts others (theft, domestic violence). Again, the link is clear as both Ray and Billy reveal stories of their fathers that directly connect to their own perspective of life.

Nil by Mouth is an acting tour-de-force, with Ray Winstone at his very best, demanding our attention as he walks into every room. Personal, relevant and darkly true-to-life, Nil by Mouth is a testament to British cinema and how honest we are when revealing the conflicted nature of family.

This post was originally written for Flickering Myth in August 2015