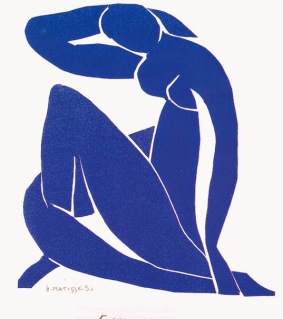 Tate Modern (17th April 2014 – 7th September 2014)
Cut-outs can easily be considered a less-complex manner to create art. Indeed, creating collage by cutting and arranging images or patterns is something often attributed to childhood. But, like all art forms, developing a skill requires patience, experimentation and a passion that borders on obsession. Though cut-and-paste projects at primary school can be an afternoon’s pleasure or an integral part of a group puzzle, Henri Matisse devoted himself to cut-outs when restricted to a wheelchair in 1941. Gouache-painted sheets of paper, subtlety coloured in specific tones, accentuating the diverse range of colours were Matisse’s medium of choice in his final years.
The Tate Modern has showcased, and organised, an exhibition that charts Matisse’s final years. His initial experiments with collage (arranging and re-arranging simplistic bowls and fruit for a painted final piece) through to his obsession with patterns, colour and natural forms. Akin to a majestic performance, the exhibition saves his greatest act till last as, following his blue nudes, are his enormous cut-outs and window-designs that dominate walls, filling the final rooms. 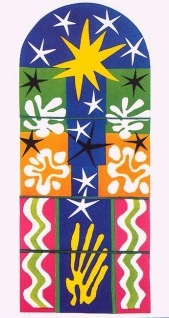 Exiting through gift shop, the blue nudes are clearly the saleable and popular art pieces on show. The various experiments consisting of an elongated leg held by a crouching woman, composed of merely cobalt blue figures on a white surface is simply perfect. In this exhibition, we see the evolution of a version consisting of multiple papers, tweaked and layered to create the nude, and then the same nude composed of only one, perfectly cut, single sheet. The smooth, sharp slice of metallic scissors to cut out the arch of her back and the length of her thigh is surely as satisfying as hearing the long, smooth sound of a saxophone. Indeed, the playful, improvised and vibrant arrangements became a book, titled ‘Jazz’. He illustrated, supported by notes, and though unrelated to the music style, it remained an appropriate title.
Due to his sickness, his work becomes more abstract and spiritually dominant as you work your way through. Though the shapes are clearly integral to the images, he becomes more obsessed with colour in his later pieces opposed to the figures, shells and leaves seen originally. There is poetry to his contrast between curved and expressive shapes against the sharper edges of squared frames and defined edges. The larger the scale, the patterns become clearer and symmetry becomes an important way to balance the composition – but colour is larger and over-powering. With this in mind, it seems natural and purposeful that his work became more spiritual. The final room, demonstrate how natural his cut-outs are when converted into stained-glass. Christmas Lights(1952) showcases a true combination of considered tones and arresting shapes. Your eye looks up to the glorious light, demanding your attention in the centre of an abstract arrangement of form and colour. There is no Christ in a manger, or God touching the hand of Adam. It is proof that simplicity, such as the innocence in a child’s art piece, hides the greatest beauty.