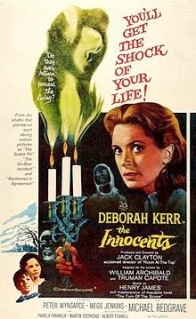 Is it real or is it all in your mind? When Deborah Kerr’s Governess takes on the position in Bly Mansion, she slowly loses her mind as she becomes convinced the children are possessed. The brilliance in The Innocents is not just within the spooky story but within the sprawling grounds and the gothic architecture that surrounds the fractured family. Inspiring films as diverse as The Orphanage and The Woman in Black, Jack Clayton’s psychological horror rarely uses jump-scares to shock and instead transcends this through shrieking sounds that pierce the ear as moody lighting covers the shadows and ghosts that lurk in Bly Mansion.
A bachelor (Michael Redgrave) who cares not for his niece and nephew (and yet was orphaned with them) hires inexperienced Miss Giddens (Deborah Kerr) as Governess with the explicit intention not to contact him if problems arise. The young children are Flora (Pamela Franklin) and Miles (Martin Stephens). Miss Giddens is taken with Flora but introduced to Miles when he is unexpectedly excluded from school. Bly Mansion’s housekeeper (Megs Jenkins) reveals that the previous Governess and Valet had an illicit love-affair that was flaunted amongst the staff and young children. Miss Giddens is convinced that, though both deceased, the ghost of Governess Miss Jessell (Clytie Jessop) and Valet Peter Quint (Peter Wyngarde) still haunt the house and control the thoughts and attitudes of the children. 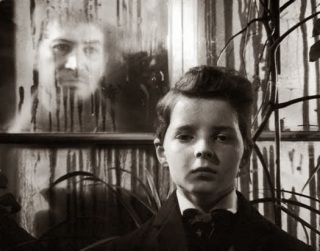 For over fifty years, The Innocents has been widely considered one of the scariest movies of all-time, with Martin Scorsese placing the film 11th on his own list of horror films. It’s cult following could be attributed to the deeply sinister portrayal of Miles – a role that is unsettling in the hint of what this boy could achieve in the future with such affluence and freedom. Miss Giddens relationship with him is also fascinating as he seems to stir a demon deep within her. Quint’s reckless abandonment towards sex, she believes, is transferred onto Miles as Miss Giddens is drawn to the young boy. To balance such mature themes and play the role so strongly is a credit to his talent. Deborah Kerr equally stands out. Her desperate intentions fall on deaf ears and her own morals and ethics seem to overshadow her own sense of duty and care – and we struggle to know whether it is her madness or the crazed kids.

This is an unforgettable film. The hint at darker themes regarding isolation, class and social divide could surely be the topic of a different article, but there is clearly a wealth of subtext wrapped within the film. Based on the novel The Turning of the Screw by Henry James, with a script co-written by Truman Capote, The Innocents is a story that has emerged from a startling quality of literary sources and a wealth of undertone can be drawn from the source material alone.
Combining the story with the soundscape, we are left with Freddie Francis’ cinematography creating an atmosphere akin to a Caspar David Freidrich landscape, complete with misty moors and high arches. Certainly worth watching at the cinema, Miles and Flora won’t lose their appeal any time soon. If you are keen to see a film that carries such credibility and additionally still stands up to modern audiences, you cannot go wrong with The Innocents.