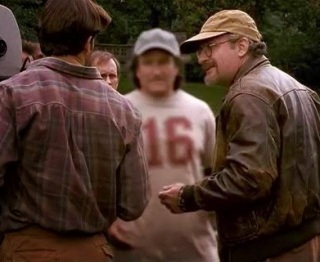 Deconstructing Harry (Dir. Woody Allen/1997)
Rewind, edit and re-run. Remodel, reconstitute and reconfigure. Memory and films hold many parallels. In Deconstructing Harry, Woody Allen toys with memory and the inspiration one finds for their art. Opening credits is an edited sequence of a woman stepping out of a cab. It’s disorientating, as the film can be, as Deconstructing Harry flips between fictional stories written by Harry (Woody Allen) and Harry’s life itself. This current incarnation has a crisis of identity – he is older and single with one child he can barely visit. The different “stories” he has written, which we see, are “Woody Allen” scenarios. Robin Williams plays an actor who is literally out of focus in one story while Julia Louis Dreyfus and Richard Benjamin are the hyper-sexual lovers interrupted by a blind Grandmother mid-session. Assuming you have asked whether his films are autobiographical in any way, this would be Allen’s insightful, considered answer.
Rating: 8/10