The Curse of the Cat People (Robert Wise/Gunther V. Fristch, 1943)

As part of a double-bill, BFI Gothic additionally screened The Curse of the Cat People, Robert Wise’s strange sequel starring the same characters but with shoe-horned Gothic elements that fail to truly connect to each other. Strangely, The Curse of the Cat People does not feature any cats – except a feline that runs up a tree in the opening moments of the film.
Taking place roughly 9 years after the events of Cat People, Alice and Ollie are now married with a young daughter named Amy (Ann Carter). Amy is a day-dreamer, often becoming side-tracked by butterflies and old, scary houses. Akin to Miss Havisham in Great Expectations, within the spooky house resides a reclusive old lady. Serving as a minor-narrative, Amy befriends this woman not knowing how fractured the old lady’s relationship with her own daughter is. Meanwhile, Amy has created an imaginary friend in her garden – and we realise it is Irena from Cat People. Understandably, Alice and Ollie are concerned and worried for their daughter – and perplexed by how she could imagine a woman whose death was prior to her birth. 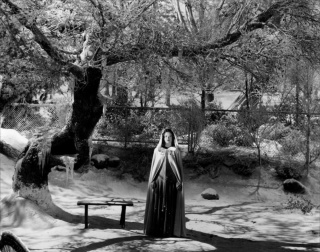 Cat People toyed with the pseudo-psychological reality of the ‘Cat People’, while The Curse of the Cat People seems to only flirt with the idea that there is a wealth of psychological theory in a child’s behaviour. In one sequence a primary school teacher relays multiple justifications for the imaginary friend of Amy’s – quoting a poem and specifically highlighting a book named ‘The Inner Child’. Instead, The Curse of the Cat People uses gothic tropes to give the film a look that enhances the environment. Cat People has an almost film-noir tone in New York, while The Curse of the Cat People moves the story to a suburban estate with white-picket fences. A decrepit house, replete with cobwebs and old jewellery becomes the haunted house on the hill. Irena’s gown is white, flowing down her feminine figure so that standing in the garden, Irena is a mysterious ghost that offers advice and friendship to Amy.

A fascinating double-bill as Cat People inspires cinema and remains an established staple of tense, mysterious horror filmmaking, The Curse of the Cat People is a misjudged amalgamation of child psychology and haunted-house genre filmmaking. Director Robert Wise went on to direct The Sound of Music and West Side Story, so it is worth seeing a director in his early years flexing his artistic muscles, but it is Jacques Tournier’s suspicious characters and story that remains with you into the night.

This is Part II of a double-bill screening with Cat People. Part I of the review can be found here. The full review is on Flickering Myth.