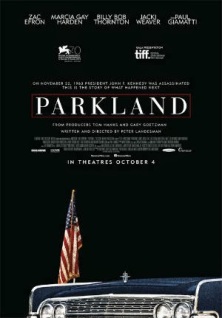 John F. Kennedy’s assassination is a moment in history shrouded in conspiracy theories. Parkland aims to recreate the three days – beginning with the day the President was shot – through to the immediate aftermath and death of JFK shooter Lee Harvey Oswald. Well-documented and thoroughly researched, Parkland is the directorial-debut of Peter Landesman – a journalist himself seeking to ignore the myth and focus on the reality. ‘Parkland’ itself is the hospital Kennedy died within – and where, days later, Oswald was rushed to. Clearly capitalising on an intriguing and important story, Parkland fails to match the cinematic scale of the event. It is held back by the safety-net of ‘accuracy’, becoming a pedestrian and bland version of one of the most iconic time-periods in American history.
Told from multiple perspectives, Parkland shows us how this death immediately changed the lives of everyone who woke-up on 22nd November 1963, excited to see the motorcade in Dallas. Multiple doctors and nurses within Parkland hospital (Zac Efron, Marcia Gay Harden and Colin Hanks) who desperately tried to save his life; Mr Zapruder (Paul Giametti), capturing the infamous footage on the Dealey Plaza; Robert Oswald (James Badge Dale), the brother of the assassin; Jim Hosty (Ron Livingston), an FBI agent ‘tracking’ Lee Harvey Oswald and Secret Service agent Forrest Sorrels (Billy Bob Thornton), tasked with finding evidence on the murder itself. 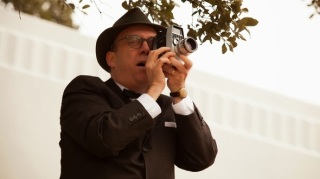 Ensemble dramas lend themselves well to historical events (as Emilo Estevez’s Bobby did in 2006, covering the final hours of JFK’s brother, Robert Kennedy). In a post-9/11 world, an influx of terrorist-attack film and television has shown ensemble-versions of fictional US-tragedy ranging from televised action-series 24 through to Hollywood-trite Vantage Point. The explosive scale of the latter suited the big-screen while Parklands reserved and thoughtful approach fails to require such scale. Actors from 24, Band of Brothers and The Pacific only reinforce the televisual style of story-telling delivered. Following the shooting, Jackie Kennedy (Kat Steffans) is covered in blood from the shooting until she boards Air Force Once; guards have blood spattered all over their suits. It looks gruesome and horrific, but more akin to E.R.rather than World Trade Centre. 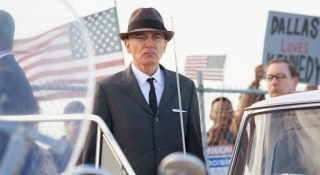 This begs the question whether Parklands should be a feature film at all. The tiny time-frame may have a limited scope but the broad range of characters and the potential for further characters (such as Oswald-killer Jack Ruby, a character Landesman considered in early drafts of the script) surely could have suited the much-heralded, longer-medium of the TV-series. The same stylistic 1960’s milieu as Mad Men would gain a large audience – especially with Tom Hanks as producer. The alternative is a documentary, as talking heads can reflect on the event and provide further insight into the accuracy of the reconstruction. Barry Ackroyd (of LFF Opening Gala film Captain Phillips) is cinematographer and his work shows-off a depth of colour that highlights the bloody work within an A&E department in the 1960’s.
Unfortunately, the efforts to capture accuracy restrain the director. Unlike Argo, whereby the closing credits alone show how accurate their depiction of the 1979 Iran hostage crisis was, Parklands weaves original footage throughout the film itself. Conspiracy theorists will conspire. Though Parklands actively chooses not to dwell on these ideas, a central character to sympathise or empathise with could pull you into the story rather than split our attention. Multiple characters falling to the floor, head in hands when the President dies (at least two) or wandering speechless, in shock to the situation (at least another two), is inevitable and expected – so what is Landesman adding to the story except recreating it? Those who have accepted the non-conspiracy version of events will gain little from seeing a recreation of a moment that has been documented so much. While Parklands may not require a ticket-stub, it could’ve been amongst the higher-quality television – and in fairness, that is no easy feat.
Written as coverage for The 57th London Film Festival for Flickering Myth.