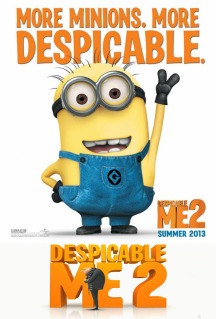 “That’s right, baby! Gru’s back in the game with cool cars… gadgets… and weapons!”

Whether you enjoy Despicable Me or not, it is clear from the outset that this is a heavily manufactured product. Small, silly-voiced creatures for Lemming-like comedic effect; a villain clutz at the centre of a story with imitatable foreign-accent and finally, to top it off, three “leedle” girls – including a wide-eyed cute one that proved you had a heart of stone if you didn’t think she was adorable. Despite these animated film cliches, Despicable Me was touching in the depiction of adpoted children teaching a Father how to be a better role model. A role model that, in turn, impacted on the “minions” themselves. Released in 2010, Despicable Me capitalised on the “new” 3D trend and included multiple exciting 3D features including a rollercoaster ride and a playful end-credits sequence as the minions attempted to reach further and further into the audience. Could Despicable Me 2 use 3D in such an interesting way? More key to the original films success, we wonder if Gru (Steve Carrell), now “good”, could retain his “superbad – superdad” charm? 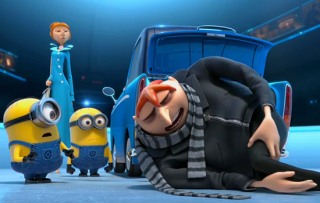 To re-establish our favourite characters we see how Gru has set up a perfect family home for his girls – they continue to sleep in old nuclear bombs – but Gru has begun to organise parties for them, much to the delight of the parents as women try and set Gru up with single women. But things change dramatically when Lucy (Kristin Wiig) appears and, though a secret agent for AVL (Anti-Villain League), she knows of Gru’s past achievements and kidnaps him to assist in catching a new villain. He has created a serum that turns cute bunnies – or cute minions – into crazed, dangerous killing machines. We join Gru and Lucy as they investigate the many quirky characters of a shopping mall (where the serum was last detected…) – and watch as they begin to work out who is the real super villain. Is it the Mexican Restaurant owner? Is it the Asian hair dresser? Who knows…
The real heart of the story though is now on Gru – the three girls are merely accomplices and assistants to his new role as AVL Super Spy – and his growing relationship with Lucy. The minions are in a slightly improved role as the final act reveals the super villain kidnapping the yellow creatures and transforming them into crazed-purple animals. But, personally, I felt the that the family established at the end of Despicable Me was more than successful 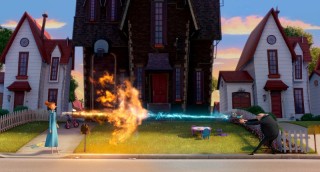 Considering Despicable Me 2 is released the same summer as Monsters University, it is interesting to reflect on the story behind Monsters Inc: Two (assumed fearful) male monsters, we find out, are brilliant parents to an adorable girl. The successful celebration of non-traditional families is clear-cut as both Mike and Sully become ideal parents despite their same gender and incorrect judgement (from us) that they are dangerous. Despciable Me 2 argues that, actually, children need a Mother – and parents need a partner – to successfully create a family. Agnes (Elsie Kate Fisher) pleads with Gru as she questions, in mock-frustration, why he has no partner. Gru awkwardly and uncomfortably manages to join forces with Lucy to give the children what they want – a Mother. Heaven forbid he is a strange, single parent – imagine if he was gay! Not in this sugar-coated, incredibly-popular kid-friendly film. Imagine the children of non-traditional families leaving the cinema – why can’t I have two parents?

Furthermore, we notice that, unlike Despicable Me – whereby the foreign-accented character is outed as a loveable rogue – Despicable Me 2 assumes that (outside of the lead characters) foreigners are not to be trusted. Thematically, DM2 rewinds the clocks to a different time. 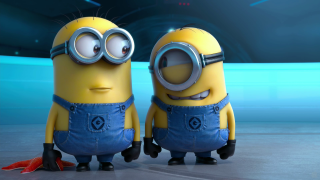 But the film remains enjoyable and playful to the point that it seems to know all to well what we want from a fun, colourful, funky film. A nostalgic nod to All 4 One’s ‘I Swear’ acknowledges the slightly-too-old-for-kids-film audience that clearly adore the film whilst the duck-and-dodge dynamic of investigative secret spying weaves into the film an energy that harks back to The Incredibles.

Despicable Me 2 hasn’t lost the plot and understands a little of what we liked about the original, with one lovely flashback to Gru’s childhood – something we all enjoyed in the first film. But if you are hoping that it pulls on the heart strings as much as DM did, unfortunately it fails to deliver. Despicable Me 2 is enjoyable and kids will be as quote-happy as they were the first time round, but it fails to break any ground in telling a story that hasn’t been told many times before. As unexpected as it may have been, Despicable Me felt fresh and new opposed to Despicable Me 2 that feels expected and recycled.