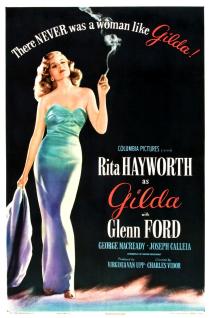 “I thought we agreed that women and gambling didn’t mix.”

In The Shawshank Redemption (titled Rita Hayworth and the Shawshank Redemption in Stephen King’s Different Seasons) there is a moment whereby we see a scene from Gilda. Andy Dufrane (Tim Robbins) attempts to ask Red (Morgan Freeman) to bring him “Rita Hayworth” but before he can ask, Red tells him to wait so that he – and all the prisoners – can fully appreciate her cinematic introduction: “Gilda, are you decent?” [she throws her hair back] “Me? Sure. I’m decent”.

The prisoners cheer in what may be one of the most iconic moments in Hollywood history; a moment that truly established her as a star from the trailer alone. But Gilda carries more than mere eye-candy for the viewers, it is also considered the “gayest, straight film” according to  David Benedict (who introduced the film at the BFI) as the love-triangle seems to be more between Gilda’s (Rita Hayworth) husband Ballin Mundson (George Macready) and Johnny Farrell (Glenn Ford) … at last until the final act anyway. 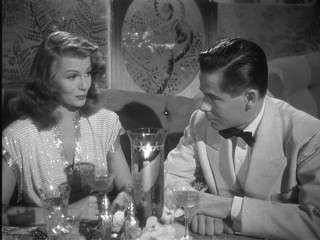 Opening on Johnny Farrell rolling the dice and winning a fixed gambling game, we realise that this is a man down on his luck, despite his winnings. Attacked briefly, he is saved by Mundson – carrying a cane with a concealed blade – and the two strike an unlikely friendship. It does beg the question as to why does a high-rolling, Casino-owning Ballin Mundson lurk in the dark alleys and save attractive men? Considering the 1946 time-period, you can leave it to your own imagination as to the subtext raised in these opening moments.

Ballin and Johnny form a partnership, with Johnny as manager of the Casino Ballin owns. After a short holiday, Ballin returns with a new wife: Gilda. Within moments, we realise there is more to her than meets the eye as she has a history that, somehow, involves Johnny. Rather than adhering to a strict generic code, Gilda manages to blend a wide range of filmmaking styles to become unique in its own right. Briefly, Johnny Farrell’s immorality and narration firmly root the film in the Film Noir genre, but the romantic edge, musical numbers and comedic touches obscure this simplistic description.

Glenn Ford plays a character who holds unclear motives. Though he had a relationship with Gilda, he is cruel and unkind to her – as if to highlight how she is what has come between himself and Ballin. At one point, Ballin orders Johnny to go home with Gilda – but Johnny refuses, arguing that he should be with Ballin. He reluctantly leaves, but their relationship is clearly hinting at something more than friendship. Johnny Farrell’s weak smile, sense of self-loathing and his abusive treatment of Gilda turns him into a character who you find difficult to like – but I think we all know the true challenges he faces and how his actions are all in re-action to his true love of Ballin Mundson, and the conflict of emotions he has towards Gilda. 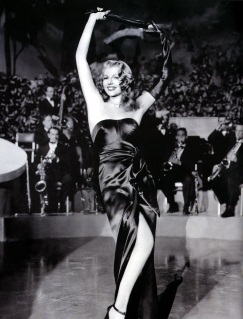 But Gilda oozes sexuality and the single movement of removing a satin glove, within a dance routine, in a repetitive stroke is considered one of the most erotic scenes in cinema. Her moody, sultry singing of the unforgettable “Put the blame on mame”, whether it is front and centre in the middle of a club – or as a late-night private song – still draws you into her animalistic prowess. The strange narrative that twists and turns in a manner that loses a sense of consistency by the end doesn’t destroy the performances – and indeed, George Macready plays a villain that wouldn’t look out of place in a James Bond movie as he wears a long formal dressing-gown and, akin to Oddjob, a concealed weapon. Even his baldness precedes 007’s arch nemesis Ernst Stavro Blofeld.

Like Johnny, we are viewing this world as a visitor. We are introduced and mesmerised by the world Ballin inhabits. They are all despicable characters – Gilda marrying a man for his wealth; Johnny content in his gambling occupation; Ballin as the owner of a Casino that makes money off Nazi’s. But we are still drawn to the world and the complex and unlikely relationship between the characters. This explains the love for the film, and why people continue to be drawn to the story. The romantic couple “hate” each other; the villain confesses how he loves his wife – and yet we root for down-and-out Johnny. All these elements ensure Gilda is not forgotton, but I doubt it would remain as unforgettable without the graceful, elegant Rita Hayworth portraying the reckless and wil Gilda, who manages to portray a confident woman – but a woman men love to hate.

Gilda is playing at the BFI this week on June 28th – click here to get tickets!