In an attempt to get completely up-to-date on one of my favourite TV-series The Simpsons, after I watch each season, I will choose my favourite episode…

When I decided which episode would become my favourite of the series it was an easy choice. Despite my fandom of U2, their appearance in Trash of the Titans is the only highlight (“Wanker”). The episode centred around Ralph Wiggum, This Little Wiggy, should’ve been brilliant, but missed the cut. Even an episode utilising Jim Varney and good ol’ Cletus, in Bart Carny, should’ve been better but again didn’t hit the mark. The season also kicks off with The City of New York vs Homer Simpson, a rare episode that is not often on TV as it is primarily situated at the base of the Twin Towers – Homer even manages to have his car clamped in between the two buildings. Jokes abound as he runs up both towers for the toilet and he witnesses staff from the South tower argue across to those in the North tower (Something the writers regret). It is a strange watch. 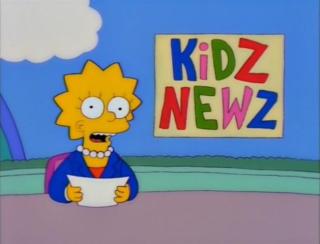 But Girly Edition pre-dates Anchorman as it pokes fun at the news-industry. Lisa wants to be the intelligent reporter as Bart is the sensationalist – even Milhouse has a small role informing kids how to get rid of urinated-on bed-sheets. This is, in turn, supported by a sub-plot whereby Homer has a monkey. The pure randomness of this subplot makes for great laughs too.

As an interesting aside, writer Larry Doyle (of Looney Tunes: Back in Action and I Love You Beth Cooper) wrote the episode – and it is the first of only seven he wrote. In that regard, it feels a little different. Additionally, Eric Stefani (brother of Gwen) had to be called back to the show to help animate the sequences between Homer and the monkey too. So strange – it only seems perfect that the monkeys last lines are equally obscure as he writes – “pray for Mojo” on a computer.

So, my favourite-sequence is not only memorable for such perfect timing – but it also introduced the Cat-Lady to the world. (And, luckily, there is a YouTube video of it too!)

Lisa: They call her the cat lady, people say she’s crazy just because she has a few-dozen cats. But can anyone who loves animals that much really be crazy?

[Lady gets out of house, sees Lisa, and starts throwing cats at her, and chasing her]

[Train comes past, displaying the words ‘Union Pacific’ on each of the 30 or so carriages, when the train fully gets past, the lady with the cats is there, still chasing here]