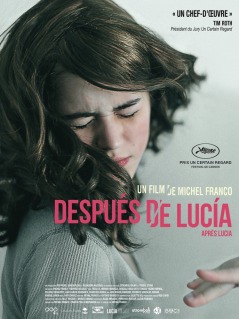 Director Michel Franco broke out in 2009 with a small indie-hit Daniel & Ana. His follow-up, After Lucia, has garnered huge critical acclaim through winning the Prize Un Certain Regard at the Cannes Film festival and receiving the Silver Hugo Special Jury Prize at the Chicago International Film festival. At the London Film festival it was in competition but, late last night, it was revealed that Rust and Bone took the prize. The film has also been selected as Mexico’s entry for the Academy Awards so we have yet to see whether the film will continue to take awards between now and February. After Lucia introduces Father and Daughter, Roberto (Hernán Mendoza) and Alejandra (Tessa Ía), as they travel to begin a new life in Mexico City following the death of Roberto’s wife, Lucia, who died in a car accident.

The opening sequence establishes a pace that doesn’t stop throughout the film as we see, from a static-camera inside a car, the Father pick up the car which has had a wide range of alterations before he drives away, parks the car, and leaves. The sequence lasts at least seven minutes and, as soon as he leaves the garage, you feel like something will break the tension. Akin to Little White Lies, it crossed my mind that someone may crash into him – or could he crash into someone else? Neither happens and, as noted, he merely drives away, parks the car and walks away.

This type of observation is what Franco utilises throughout the film as we are often situated behind characters, following and observing their movements. We think about where they are going and what they are doing. And Roberto is a character who is reserved and thoughtful – a man of few words. Alejandro, nicknamed ‘Ale’, is equally quiet and patient. Both are content on their own and, without a score or soundtrack, this creates an atmosphere that is rooted in realism – but also in the inevitable tropes of art house and indie cinema. Shots linger on characters on sofas; they look into the mid-distance. Car-journeys are long with questions that characters ask – but are given a mute-response, forcing us, as a viewer, to think about why no answer is given.

The core-narrative revolves around Alejandro’s horrendous experience at school. She becomes the victim of bullying after she has sex with a boy in the group. He records the incident on his mobile phone (drawing parallels with the phone-footage showing the smashed-car which killed her mother) and circulates it around his friends. Consequently, she is taunted, molested, physically abused and raped. As a secondary school teacher, inevitably I found this entire story absolutely appalling. Why does she not tell the teachers? How can students be so brash – without any children even attempting to intervene? Why do the students go on a school trip whereby staff do not even check students in the evening; as students drink, smoke and make-out “under the supervision” of teachers. Even in the final few scenes, teachers would meet questions with blank expressions and no answers. This, I believe, is not representative of my profession and – as education is not the focus of the film – I believe this mishandling of the context is grossly exaggerated and ineffective. The sequences play-out more to shock, rather than investigating the reality of bullying.

The focus is her isolation and loneliness – her inability to express herself or turn to someone when she is in need. We hear how she was offered psychological support but her Father turned it down; she claimed her Mother was teaching her how to drive (Was she responsible for her mother’s death?). Therefore, this leads you to consider whether her decision to not involve anyone, or turn to anyone, may be rooted in a self-destructive attitude. Does her guilt weigh so heavy on her mind that she sees the bullying as penance for, what she believes, is her sins? Whether this is the case or not, akin to the ending of the film, it is unclear and unfulfilling.

A story that is set-up as a film coping with loss and mourning can easily slip into an almost-cliché camp of indie-film expectations. Ambiguous scenes, unexplained set-ups and a slow-and-steady pace lends itself well to a film attempting to analyse the after-effects of loss; indeed, I can only imagine the frustration and timelessness you could feel when coping with the loss of a loved one. But in cinema, we have seen this before – and sometimes a little clarity would assist in the audience gaining closure. So that when we leave the cinema, we can reflect on the film personally without having to seek clarification for plot-points. We surely shouldn’t be seeking clarification regarding the purpose of the film itself.