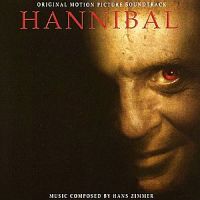 The music attached to a film creates the environment, I believe, moreso than the literal environment depicted through the visuals…
This is such an important soundtrack to me. Hannibal was the first 18-rated film I saw at the cinema (at the tender age of 16) and I loved the film. Such class and beauty – and it was the first time I fell in love with the city of Florence. Shortly after watching the film, a close friend became infatuated with Anthony Hopkins, even using Vide Cor Meum in a performance in college. I loved the song and had to hunt down the soundtrack. I had the soundtrack. I lost the soundtrack. I re-bought the soundtrack. Since buying the soundtrack (twice), I have listened to it,in its entierety, hundreds of times. The music flows so effortlessly and, in some cases, have no gaps between the tracks.
In fact, I have listened to the soundtrack so much that Vide Cor Meum – the reasons I purchased the CD in the first place – is rarely played whilse tracks 1 through 11 are played often. Let My Own Home be My Gallows becoming a favourite.
And, for all you fans of Kingdom of Heaven, the recycled use of Vide Cor Meum in that film was one of the stupidest ideas Ridley Scott has ever had.
9. Let My Own Home Be My Gallows – A 10-minute track that is used as Francesco Pazzi meets his fate in the Palazzo Vecchio off the Piazza delle Signoria. Subtle-at-first and slowly building up to a grand and deeply unsettling madrigal section before Anthony Hopkins begins a monologue used in the film.
10. The Burning Heart – I love the romance within this track as strings lead the song. Again, one of the three tracks a segment of Anthony Hopkins dialogue is used.
12 – Vide Vor Meum – The reason I bought the CD and maybe a reason you should buy it too …