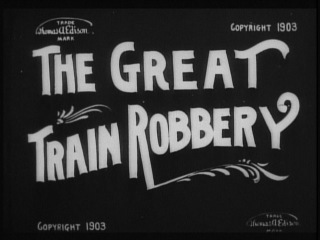 “Copywright 1903”
Introduction
As I try and update my 1001 Movies To See Before You Die list, I notice how The Great Train Robbery is one of the many films I have not see. Only 12-minutes in length, available on YouTube (it is embedded below), I have no excuse. Indeed, if Martin Scorsese is going to reference it at the end of Goodfellas, then I had better watch the film myself. It is one of the most important films in cinema history – not only as it represents Edwin S. Porter at his peak at filmmaking for Thomas Edison but also because the film managed to utilise many techniques that were considered ground-breaking at the time, such as cross-cutting.
Before the Film
Mark Cousins references Porter’s previous film Life of an American Fireman, also from 1903, in his epic The Story of Film. He references it to highlight the differing techniques of cutting. Originally, Life of an American Fireman, cut from outside the house to inside the house, incorrectly. Showing the fireman climb a ladder and go inside the building before cutting inside the building and, again, the fireman climbs through the window. It felt as if we saw the action of the fireman climbing through the window twice.
In The Great Train Robbery, the cutting is more accurate. A set-up showing the robbers tie up the train station official before boarding a train. On board, there is a shoot-out and the robbers ensure the entire train is forced off before stealing their money and escaping. The police begin chase and track them down, killing them all – before a final cut-away to a robber, gun facing the camera, and shooting 6 times.

He See’s You
The ‘shock’ factor portraying the lead-robber (played by Justus D. Barnes) at the end was added for shcok value. Already, in 1903, the role of film as entertainment over powers any sense of realism. The film catalogue description states:

Yet, the final shot has no neccessity or narrative logic. Indeed, the end of the film shows the gang shot down by the ‘posse’. This finale is entertainment at its purest form – and the fact that every James Bond film starts off with a gun-barrel sequence, not unlike the shooting at the end of The Great Train Robbery, almost qualifies 007 as pure entertainment. It is this adjustment of a ‘faithful duplication’ for the sake of ‘fictional entertainment’ that I personally like to take away – but it is the editing which actually makes gives the film historical importance.