Art Against Knives: THE PRINT SHOP 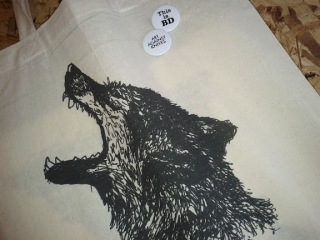 This was originally published on TQS Magazine on Saturday 2nd June 2012. Every now and then I have written about Art Exhibitions at The Saatchi Gallery and The Hayward Gallery. Hopefully, thorugh writing for TQS I will write much more about Exhibitions in London!

August 2008. Art Student Oliver Hemsley, 20, was in Shoreditch, London, walking with a flatmate. A group of youths, one the age of only 15 years, attacked him. A random street-attack left Oli paralysed as one stab-wound to the neck led to a spinal cord infection, spreading to his brain. Prior to the attack, he had been accepted at Central St Martins College. He was tipped to become a “star fashion designer”. 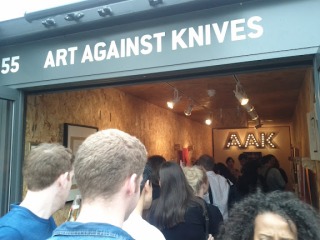 In response to this, Art Against Knives was born. Originally an auction which aimed to raise money and inform others about the situation. Students from CSM were the first artists involved but then it grew – donations from artists including Tracy Emin, Anthony Gormley and Banksy all ensured the exhibition became a national success with coverage in leading publications including The Independent, Vogue and the Evening Standard.

The current exhibition and auction, The Print Shop, is a much smaller affair based within the Boxpark in Shoreditch. These are prints designed by professional graphic-designers at BD Network and produced by young people in East London. Unlike the previous auction, this auction is a testament to the projects AAK has implemented across East London, whereby a weekly workshop in collaboration with Hoxton Hall is available to young people in Dalston. The work on display has been printed by these young people and funds raised will go directly back into these projects to continue to support the thriving arts in the area. The charity tackles the ‘root causes’ of violent gang culture by offering an alternative in the form of expression through the arts – and the ‘Mystical Creatures’ and ‘Strange Beings’ which are on display in the exhibition show a playful attitude towards expression and what is defined as art. 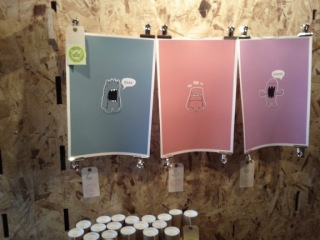 In fact, many of the designs seem to imitate artistic-styles seen across the world in the form of Street Art. Only recently, Shoreditch and Old Street were inundated with Street Art designed by artists ROA, Phlegm and Stik – amongst many others. As an example, ROA enlarges animals which are harmless – squirrels, rabbits, etc – and, through the expressive and rough style of drawing and the large-scale, the animals become threatening and scary. At ‘The Print Shop’, the animals chosen – wolves, apes and bears – are dangerous but they are turned into decorative art, postcards and canvas bags. As a reflection of what the charity supports, the angry-animals of Dalston, have already turned to art as a way of expression. Other prints have a more cartoon-sensibility, but they still look similar to the street-art that has emerged recently in East London. As an Art teacher, I love how these designs are so professional and will clearly engage teenagers in the area – it is playful, fun and a great example of what Art can be. It does not have to be within a white-space with an elderly patron handing leaflets to you as you walk in – these are art pieces made by young-people, for young-people and so it is relevant to the teenagers in the area. A refined, professional and finished version of the doodles and cartoons completed in the back of an exercise book or a homework-planner. They can relate to it and will realise that art can be those doodles and cartoons.

The exhibition will continue to run between 1st and 14th of June, at Boxpark Unit 55, in Shoreditch. Gallery opening hours are 11am-7pm, with a later-opening until 9pm on Thursday and a shorter-opening on Sunday, by shutting at 5pm. Well worth popping down and supporting a worthy cause.

Visit the site for more information!