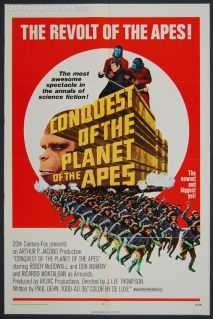 “Tonight, we have seen the birth of the Planet of the Apes!”
Introduction
By this stage, in the fourth Planet of the Apes film, it seems that the producers knew where they were going. They knew how the ‘circle’ was due to wrap up the story of the apes. But, a sequel without a single character from the previous installments (except Senor Armando) was always going to be difficult. Considering the previous two films ended with very little hope, it is clear by this point that ‘hope’ and ‘optimism’ is not a theme of these films. Indeed, every lead protaganist generally dies at end of the film they lead – except Taylor who ‘tops’ this by destroying the earth entire. In terms of connecting this film with Rise of the Planet of the Apes, at the very least, we now meet the original ‘Ceasar’ – Cornelius and Zira’s child. Played by Roddy McDowell, he is now one of the few actors alongside Michael J. Fox in Back to the Future Part II, who has portrayed both the Father and Son of a character – in this case both Cornelius and Ceasar. 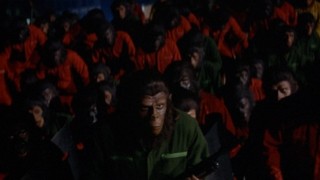 Writing on the Wall? Does the Timeline fit?
The opening credits shows how the world has changed. It is 1991, almost 20 years since the end of the previous film. During those twenty-years, due to ‘something’ from space which the apes brought with them, all the dogs and cats were wiped out – and so humans began to keep apes as pets, before realising how well they adapted and learned, consequently turning the animals into slaves. As mentioned in the analysis for Escape from The Planet of the Apes, the slavery-theme becomes to come to the fore in this film.
Ceasar, child of Cornelius and Zira, has been raised by a circus-trainer – the only returning ‘character’ from a previous film. Again, though this is the same story as Rise of the Planet of the Apes, but set within a different timeline, so there are slight differences. The set-up is in accordance to the previous films, but ultimately Ceasar leads the apes and leads the rise of the apes to ensure their survival for the future.

Silence is Golden
In addition to progressing the story further, we also revisit themes which were previously established. Again, like Taylor in Planet of the Apes and Cornelius and Zira in Escape from the Planet of the Apes, Ceasar has already established the neccessity of his silence. Still, apes do not speak, so his talking will only resurrect the fears humans had with Cornelius and Zira.
The abuse and treatment of the apes is horrific – they are beaten and forced to act as slaves to their master: humans. As the only animal to speak, Ceasar can verbalise the frustration and anger the apes hold. A voice to speak out against the attrocities is what people need – as clearly, silence and standing-by, is letting the abuse continue. Again, remember that this is a film in 70’s and, a sympathetic character is MacDonald (Hari Rhodes) who is African-American. Personally, I think the parrallel is clear enough without a specific confrontation between Ceasar and MacDonald, whereby this parrallel is clearly acknowledged:
MacDonald: Caesar… Caesar! This is not how it was meant to be.
Caesar: In your view or mine?
MacDonald: Violence prolongs hate, hate prolongs violence. By what right are you spilling blood?
Caesar: By the slave’s right to punish his persecutor.
MacDonald: I, a decedent of slaves am asking you to show humanity.
Caesar: But, I was not born human.
MacDonald: I know. The child of the evolved apes.
Caesar: Whose children shall rule the earth.
MacDonald: For better or for worse?
Caesar: Do you think it could be worse? 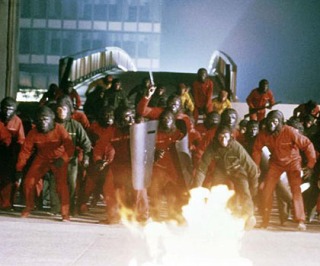 The Future, 1991
In terms of future, they didn’t go too far in showing flying-cars and hoverboards. It seems that according to the production team, minimalism is what we hope for – and, in fairness, ipods and smartphones are all about small, compact devices. But, unfortunately, TV’s in circular-glass screens – though possible – haven’t really taken off, whilst spinning-walls for minimalist decor hasn’t really set the world on fire. I’m always interested in what people ‘think’ the future will be like and they don’t go too far in this film and therefore, it doesn’t become too much of a distraction.
Second Speech
To conclude the film, there is clearly a different ending attached on for the sake of censors. Before even researching the issue, it is clear that old footage is used and shots from a perspective that doesn’t show mouth-movement is re-used to create a second speech.

As we know from the sacred scrolls, the first word uttered by an ape is ‘No’ and, this is what separates the two speeches. Originally, the film was due to end as villain Breck (Don Murray) and all the humans are beaten to death by the apes and the film abruptly ends as Ceasar looks on. Instead, Chimp ‘Lisa’ (not Aldo, as dictated by the scrolls) utters the word ‘No’, and Ceasar – strangely – changes his view:

Blah, blah. Apes and humans might get on in the future. Semi-optimistic ending – not in-keeping with the incredibly pessimistic depiction of humans and negative-ending all the films have shown so far. 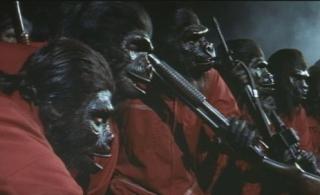 The problem with this film is the scale. It is the apes taking-over the Ape management building, when it should be the apes dominating the earth! This restricted the scale and kept the story quite small – the fate of the planet did not seem to be at stake. Where was the army? Or any further support. No discussion of simply nuking the area? Considering the nuclear theme so far. It is limited further by most scenes taking place at night, in car parks and clearly within small spaces …studio spaces. It is ‘of-its-time’ I guess and, when you watch Rise of the Planet of the Apes you see what they would’ve shown if they had the budget and scale neccessary. Roddy McDowell clearly shows an unhinged character, losing his grip on trusting humanity and the inconsistent ending is a real shame which, again, is not the case in Rise of the Planet of the Apes – as Ceasar faces-off against a huge army of enemies alongside a virus, which we see in the post-credits sequence, affects the rest of the earth.

Like all the films, great profound points and interesting subtext is littered throughout, but the small-scale and limited-production – with an alternative ‘postive’ ending – knocks the film down a few pegs. But, the Taylor-Timeline of the Planet of the Apes saga isn’t over yet – the final Battle for the Planet of the Apes awaits us …