“The gangster and the artist are the same in the eyes of the masses. They are admired and hero-worshipped…”

Introduction
So far on the ‘Classic Columb’ I have analysed Stanley Kubrick’s Paths of Glory and Dr Strangelove Or: How I Stopped Worrying and Loved The Bomb. So it seems no suprise that I now analyse a third Kubrick film in The Killing. Thematically, it follows on nicely from last weeks heist-caper The Ladykillers, as The Killing is a heist film itself. My ongoing attempts to convert film-lovers “who-don’t like-black-and-white-films/old-films” should be interested further when it is noted that The Killing was clearly an influence on Christopher Nolan’s The Dark Knight. Though the majority of movie-buffs will happily acknowledge Michael Mann’s Heat as the primary influence for the heists in The Dark Knight, the choice of clown-mask worn by The Joker (Heath Ledger) is also the only mask used in The Killing, and it is worn by lead-protaganist Johnny (Sterling Hayden) as he holds-up the back-office of a race track. Clearly much more than a passing coincidence. Then we have Tarantino who equally acknowledges The Killing‘s influence on Reservoir Dogs. 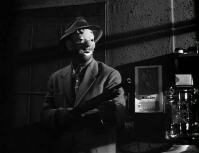 Like Reservoir Dogs, the film is short (Roughly 80 mins) and told in a non-linear fashion. From the very start we are thrown into the heist at the race-track before moving to a time before the heist. One of the films major unique attributes is how the narrative jumps between different times and moments for the sake of the characters. Sterling Hayden plays Johnny, an ex-con who has recently been released from prison. He has organised a gang to rob a racetrack to the tune of $2,000,000. Every single facet is considered and, on the take, gang-members include bar-tenders and window-tellers who work for the racetrack, corrupt-cops who assist in moving the money from one-spot-to-another, sharp-shooters and fighters who can cause a distraction. Johnny is responsible for the hold-up itself – and it is when we see him hold up the bookies that he uses the infamous Dark-Knight-Clown Mask.

The characters themselves all have different motives for assisting – window-teller George (Elisha Cook Jr) is hoping to rob the money so that his ever-mocking wife will love him more whilst Mike O’Reilly (Joe Sawyer), the bartender, is trying to gain the finances to pay doctors to assist his wife. With all these different characters, all with different motives, weaknesses and strengths, as an audience we are left to simply guess what will go wrong – and if anything will go wrong, because Johnny is the Danny Ocean of the group and he clearly knows exactly what he is doing.

With my previous posts on Stanley Kubrick, it is easy to wax-lyrical about the subtext in the films. Paths of Glory and the anti-war stance it holds, Dr Strangelove and it’s satire-on-government edge. The Killing does not have such depth. This is a heist film that expertly creates characters and dynamics that keep you on the edge of your seat.

Michael Douglas in Paths of Glory has very little background – a lawyer in the Army. He serves his purpose to get Kubricks point across – War-crimes are comitted by the governments who sanction the war itself. In The Killing, Johnny has been released from prison and this heist is a chance to gain a huge sum of money and fly-off with his girlfriend to live the rest of his life in peace. We are rooting for this character on this basis alone – and no moral compass, or deeper ‘socio-political edge’, is laid out. This is not to say that there is no depth whatsoever (see ‘The Herd & Self-Reflexiveness’ by David Gerrard), Gerrard highlights how a very minor character Maurice (Kola Kwariani) emphasises Kubrick’s ideologies. But it is a blink-and-you’ll-miss-it situation and something which would inevitably be appreciated on multiple viewings.

The non-linear structure, at the time, was uncommon. To the point that test-screenings found the film difficult to follow – and forcing the studio to push for a narration-track. Kubrick hated the narration, but conisdering the initially bad reception the fim garnered at the box-office, this seems to be a case of the studios being in the right … whilst Kubrick was hugely ahead of his time.

The use of camera is efficient and effective. By showing the same ‘seventh race’ from different perspectives, you can see that much of the race-track footage is re-used and the production is also limited to very few set-pieces. Kubrick said himself, about his production with James Harris, that “We want to make good movies, and make them cheap. The two are not incompatible”. This is a sentiment that is clear amongst filmmakers on their debut films; think about the limited production on Reservoir Dogs; the ‘choice’ of camera used for break-out films like Paranormal Activity and The Blair Witch Project; the low-quality and limited locations of The Texas Chainsaw Massacre and Night of the Living Dead.

There are still sequences that remain memorable due to their execution by Kubrick – most notably when the money is nearly stolen in the final act – the dead bodies lie strewn across the floor and the camera, handheld, hovers above the corpses as if we see the horror from the perspective of the lone survivor. Only recently, on 24‘s final season, amongst the final few episodes, the same technique is used as we are shown a massacre Jack Bauer is responsible for within the Russian embassey. The combination of handheld camera-work amongst static shots reveal the brave techniques Kubrick was employing very early in his career.

The Bag of Money

Like all cult-films, The Killing ends on an extrodinary note. Like The Ladykillers and Oceans Eleven, despite a few mishaps, the heist goes to plan. It is within the final reel that things change. How it happens is flippant and almost tongue-in-cheek. To reference my article last-week regarding The Ladykillers, The Killing ends on an ambiguous note. No ‘human element’ is responsible for the loss-of-money- simply bad luck. In the same way that it was simply bad-luck that this film did not recieve such positive praise on its initial release. Personally, this is one of my favourite Kubrick films and I would hope that – again – if you don’t often watch fifties films, you will hunt this one down.

C’mon, 80 minutes long – just whack it on, on a lazy Sunday afternoon. You won’t regret it.