To Editorial of To Advertorial?

I have recently added the Pulse App to my phone and, in the process of adding new feeds, I added Dave Chen’s always-interesting blog. Unfortunately, my app seems to have stalled at end-of-October 2009 for some unclear reason on his blog. Without knowing the date, I read through some interesting articles about a situation and negative comments on the use of advertorials (aka, Editorials paid for to advertise a product) –

“I’m not inherently opposed to the idea of advertorials; in essence, I think any form of experimentation with monetization is not only healthy for our industry, but necessary given the economic climate we live in, although the execution of paid elements like advertorials is key.”

You can read the full post here – and it truly is fascinating!
The idea of the film critic online community having such conflict simply amazes me. In fairness, this was years ago and the credability of such an argument is long gone, but it is interesting to consider how even when /film and a range of other sites started off there must’ve been a certain element of balancing business with true criticism. Thats not to say they took hand-outs but how exactly does a blog move from the small-scale to the big-time? Not to mention the ton of adverts on the film sites anyway … and, especially now, how often do we see posts on “news-sites” highlighting the cheaper price of products? 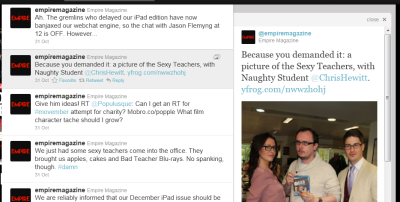 You have to question how much is, in effect, adverts. Even coverage on a topic gives something – already with millions put into the publicity – more coverage. The whole point of free-previews is part-payment for coverage … only recently Empire tweeted how some hot-teachers arrived to their office handing out Bad Teacher on Blu-Ray to the staff. Free advertising across twitter and, who knows, maybe something in the magazine?
Take out the fact that payment does not have to be solid-cash, and you realise that when anything successful determines an audience, it has to ‘sell-out’ to stay ahead of their own competitors.
In effect, it’s all advertising …