We Have A Pope/Habemus Papam (Nanni Moretti, 2011)

*This is part of my London Film Festival 2011 coverage. Four Films, Four Days …

My parents brought me up as a Catholic. I vividly recall the weekly services, reflective Homily and transubstantiation. What I have no recollection of is the excitement and tradition of an election of a new Pope. Pope John Paul II began his papacy in 1978 – six years before I was even born – and by the time he died in 2005, and Pope Benedict X began his, I was finishing my University degree and Catholicism had taken a back-seat in my life. Having said that, what made Dan Brown’s Angels and Demons novel interesting was the context of the conclave the film was set within – that and the Bernini art references in Rome littered throughout.

Moretti himself opened the film at the screening I attended, stating how some filmmakers, if they were to explore the Catholic church, may consider the more sensationalist elements of Catholic priests. Moretti had no intention of exploring this side to the Cardinals and Priests – he was more interested in the nature of becoming a Pope. The Cardinal’s gather in a room, isolated from the outside world, and vote on who they want to become Pope. Moretti involves us in this secretive and personal process of election and, furthermore, he highlights how if there is a draw between different candidates … they vote again, in many cases coming up with an unexpected outcome. In this case, the outsider Cardinal Melville is elected Pope and, to put it lightly, he cannot handle the pressure. 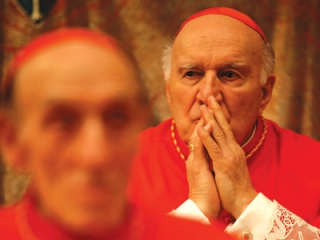 A very playful film, the story regularly includes jokes and comedic moments to ensure that the film remains enjoyable and involving. Moretti himself plays the role of a psychoanalyst and, in a brilliant first act, he is expected to conduct a psychoanalysis of the Pope with the entire conclave of Cardinals gathered around. Moretti is unsure of the boundaries – can he discuss sex? No. Can he discuss faith and, potentially, a crisis of faith? No. Can he discuss family – yes, but try not to as it is a very sensitive and personal subject. With this, in character, Moretti himself establishes the boundaries of the film and what it can and cannot discuss. Indeed, despite the film exploring the crisis of pressure to be Pope (opposed to his faith) we do not discuss his faith, his sexual habits and we only tentatively touch upon his family.

You may think that this hinders our perspective, but Moretti explains his story through moments of peace and enjoyment. Melville manages to escape the Vatican and explore Rome. We see his interest in others as he talks to a different psychoanalyst – claiming he is an actor – and then taking part in Chekhov’s Three Sisters play and confessing how he originally wanted to be an actor, but was simply not good enough. Did he follow Christ due to his failure in life? Is he an exceptionally strong actor – acting “the role” of the perfect Cardinal with demons lurking within?

These questions are not asked, they are merely thoughts that come to mind as you watch the film. We constantly move between the Conclave of Cardinal’s awaiting the Pope to announce to the world who he is and the Pope himself exploring the outside world – this opposing locations ask further questions – are the Vatican wholly detached from the outside world? Does tradition conflict with a move into modernity? Are the Cardinal’s themselves the type of people who should lead – or are they people who are more effective when they are led? Moretti’s psychoanalyst is stuck in the middle of the Vatican as his knowledge of what is happening cannot be made public. He inspires the Cardinals to play Volleyball within the grounds – this, they believe, helps the Pope come to his decision to reveal himself, and also remains an effective way to pass the time. The outsider changes the group – and, for a brief moment, gives the Cardinals a whole new zest for life.

The film finishes as we see a clear, honest statement – that rocks the foundation of the church. And maybe that is Moretti’s point – that honesty and truth is what should be the centre of faith. Being honest with oneself and revealing the truth to the faithful. To be a leader in a church is not soemthing that is easy – heavy is the crown – but, we are human, as are the Cardinals, and we need to acknowledge our humanity, and embrace our humanity, moreso than the expectation and pressure to be God-like in our image.