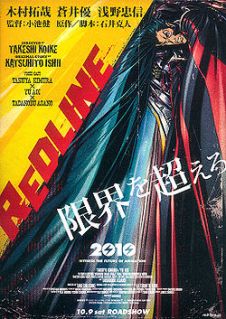 “In the Far Future. The Greatest Velocity Race Is Decided. Every Five Years. The Festival Returns. Redline!”


One thing I thoroughly enjoy is watching a film that I kow nothing about. I am well aware that, despite all my efforts, I will never really know everything about cinema. Do I know about the latest changes in Romanian Cinema? Do I know enough about British-Cinema Silent-Film industry pre-Blackmail? No. One genre I am clearly not versed in is Anime. Off the top of my head, if I was to name a couple of Anime films [that I have not seen, but I know is important] I would state: Ghost in the Shell and Akira. I would not count Studio Ghibli amongst the style – not because it is not anime – indeed Ghibli is Japanese animation – but, Spirited Away and Howl’s Moving Castle always feel a much grander and aimed at children – opposed to the teenage market I believe Manga markets itself towards (please, comment below if I am wrong about this). At any rate, I was lucky enough to nab a ticket to see Redline, the feature-debut from Takeshi Koike (the animator behind the animation in Kill Bill Vol. 1 and the World Record short in The Animatrix) as it was screened at the Birmingham Flatpack Festival, screened at the historical Electric Cinema.

“Speed Racer On Crack”
This is the comment Kwenton Balette wrote when describing Redline for Twitch Film. This truly is intense. The film is a mash-up of colour, cutting, flipping-of-switches, engines revving, aliens and false-TV-clips … with a little bit of female-anime-nudity thrown in for good measure. The film is so “non-stop” that, I believe, the only way they could slow down the end of the film was to make it abundently clear the two lead characters have fallen in love by scrawling the word ‘love’, seconds before following this with ‘The End’. Otherwise it may have been too abrupt.

The plot is so random! ‘Sweet’ JP is a racer who, in the opening race (‘Yellowline’), loses out to Sonoshee. He is gutted that he cannot compete in the ‘big race’ – Redline. But his luck changes when the actual venue is announced – Roboworld. Two racers drop out due to this and through ‘Sweet’ JP’s performance in Yellowline, he manages to be substitued into Redline. Meanwhile in Roboworld, the leaders are unhappy – turns out, they were not informed about the race – and will inexplicably attempt to kill all the racers (so you see why the two racers dropped out). This goes a bit mad and, in an attempt to kill all the racers, they unleash ‘funky-bot’ who actually becomes too powerful, and one of the lead military figures transforms into a monster and fights the ‘funky-bot’. During all of this chaos, the race is costly revving-up and then re-revving-up and, funnily enough, ‘sweet’ JP manages to win through jopining up with Sonoshee who he has loved, we realise through flashbacks. They kiss. Love. The End.
Mental.
Its For Kids!
It was a complete assault on the senses. My fellow viewer – Richard Bourne of the Bourne Brain Bafflers – explained how this film was the problem with kids today. Japanese kids I assume. But, put in the most professional way I can put it, this film has the adrenaline and pace of a kid, high on sweets and Vitamin C (I know when I was a kid, Mum would stop me from drinking too much orange juice because I got too hyper) and with severe ADHD. It was relentless. The soundtrack sounded more like a constant bass rather than an actual soundtrack.
There is only so much I can continue with this – Mike from Destroy Apathy noted on twitter how the film was ‘awesome’ (I disagree) stating it the most ‘exhilerating cinematic experience of last year’. I agree wth that. Having said that, he also mentioned that the day he watched it, he had also seen a bunch of very cliche anime and, in fairness, I have not seen enough cliche anime to even know what the cliches are.
I think if you want to be simply slapped in the face relentlessly with a pink, sugar-fused candy-bar then, yeah, this is a recommendation, but if you prefer films that simply slow-the-fu**-down then stay well clear. I sit in the latter category.