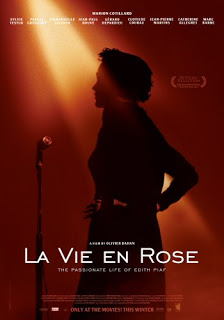 If you were to give advice to a woman, what would it be?”
Introduction

I have found myself, more often than not, deciding to complete other blog posts these days rather than the back-bone reviews on the site. Having a scan through the notes I made for so many films, I thought with this Inception buzz continuing, it makes complete sense to revisit my notes for La Vie En Rose – the often-mentioned biopic on Edith Piaf and starring Marion Coutillard…

Like many strong biopics, La Vie En Rose begins from with a poverty-stricken family. Young Edith cries on the streets of Paris, she gets taken in by what appears to be a brothel and then moves onto joining a circus. These strange beginnings are all stuck together amongts this jigsaw of a film as we bounce between different stages of her life – but I have a funny feeling this is somehow representing the all-over-the-place nature of Piaf herself, as she clearly had severe mental-health issues. Unlike other
biopics, the drugs and alcohol that go hand-in-hand with success, fame and fortune, in Piaf’s case affect her mental condition moreso.

These humble beginnings continue to haunt her as we cotninually jump between the awful parents/lack of parenting she had to the drugs and drink she takes to dull these memories – one would assume. Even her
own arrogance covers the deep-down lack of confidence within her since childhood.

One specific sequence – and spoilers here! – reveals one of Ediths’ partners married-man Marcel ‘the boxer’ joining PIaf by her bedside having returned, by plane. The camera continues to move around the house to show the shock and horror of all the other people in the building and by the time the camera tracks back to her bedside where Marcel previously was – he is gone. It is revealed he died in a plane crash. But the scene does not finish, the camera continues to track Piaf leading to her walking onto stage and singing. From the tragedy of her life, she turns to the stage to fight her demons – to beat those demons away.

I think, generally, you know what you are getting with a biopic and I think this is merely a strong biopic with strong performances. The beauty is in the songs and the tenderness of the Piaf classic: Non, je ne regrette rien. All the sadness and joy, she only thinks of love – all the love given to her and the love she felt personally. When asked by a journalist what advice she would give to a woman, advice to her younger self, this is what she would tell the woman, the child: Love.