Dublin Oldschool – “Dated, unwieldy and lacking the charm of its influences…”

After Trainspotting, there was an influx of drug-fuelled rave movies. In America, Doug Liman’s Go fused the drug scene with a Tarantino use of plotting while in the UK, Human Traffic coined the phrase “the weekend has landed” to a celebrated release. 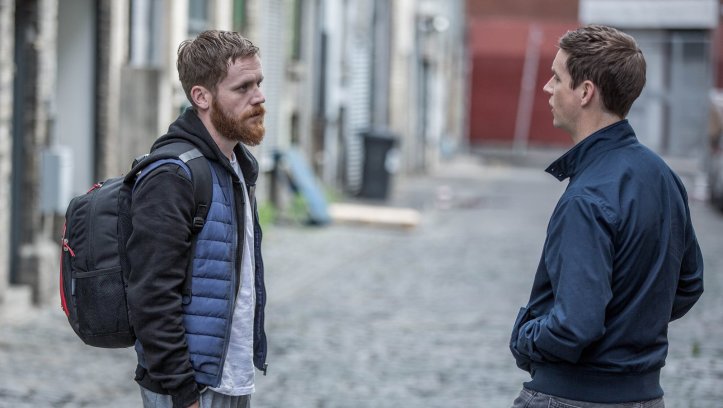 Dublin Oldschool could be from the same era, with a voice-over not unlike John Simm in Human Traffic, as drugs are the culture of these friends and houses, clubs and the nightlife of Dublin provide the neon backdrop of this narcotised weekend session.

Jason (Emmet Kirwan), a regular drug user, bumps into his brother Daniel (Ian Lloyd Anderson). Daniel is a homeless heroin addict while Jason seems to have a clear handle on his habit, so he’d say. When we first meet Jason, he wakes up on the streets and wanders into his record-shop job hours late. He loses his phone after a chase from police and the home he frequents is clearly considered a nuisance on the street with the amount of people coming and going. Naturally, Jason and Daniel regularly meet up and reflect on their upbringing and the differences in their life. Why did Daniel take “the brown stuff”, while Jason was content on ketamine? Aimlessly, the film meanders through different parties, police raids and a sprawling landscape in Wicklow before coming to a somewhat weak finale that seems to offer little as a way of resolution. 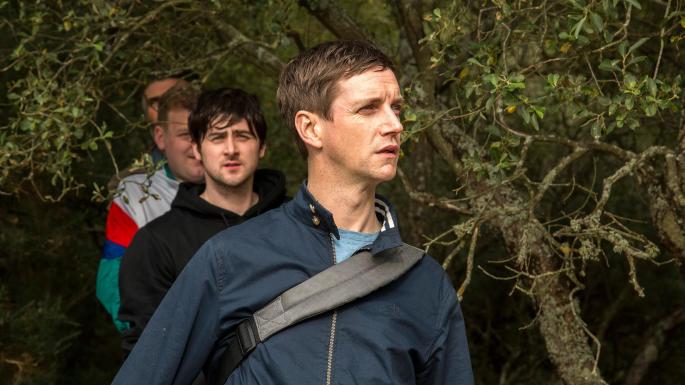 “We echo through time…” reads Emmet Kirwan, the co-writer and lead actor of Dublin Oldschool. Without stating the obvious, unlike the teenagers and twenty-somethings of the rave movies in the 90’s, these men and women are in their mid-thirties. Opting for parties and bass-heavy dance, house and techno music, strong relationships and families are far off in their mind. Jason is happy to be under the impression that he has a few years of a “good craic” left in him. There’s a conflict at the centre as the two brothers represent a tension; one is a poster boy for the problem with drugs, while the other is someone who comfortably uses. Jason, while not ruined by drug-use, isn’t far from destroying the important things in his life: his friends, his potential girlfriend and his family. But whether anything will change after the events of Dublin Oldschool is unclear.

The beating music, smoke machines and slow-motion dancing transport you to a world that many may have thought had disappeared. The cocaine lines, cigarette stubs in beer cans and smoky rooms allude to a grim lifestyle, but this is not the predicament Jason believes he is in. In the final act, a jaunt to the mountains is wonderfully captured with a sense of beauty and spectacle, as if this is what life is really about – and Jason’s voiceover seems to enjoy the experience too. During Dublin Oldschool, there’s a romance that hangs on a thread and flashbacks to his childhood hinting at a potential change, but the momentum is lost as the story gets side-tracked by London DJs and “Dave the rave” making stoner jokes.

Dublin Oldschool is not critical enough to make a definitive statement on drug-use but equally doesn’t seem to enjoy the environment the characters reside within. Dated, unwieldy and lacking the charm of its influences, if “time is a river”, Dublin Oldschool trickles out by the time the credits roll.

This was originally published as part of the London Film Festival coverage for Culturefly.co.uk in October 2018