Han was never the lead role. Introduced in 1977 in Star Wars, he was a rogue and a cad. He was cheeky and smart, but it was Luke Skywalker, the youngster, who was due to bring balance to the force. Fast forward over forty years later and Solo is handed a film to call his own: Solo: A Star Wars Story. 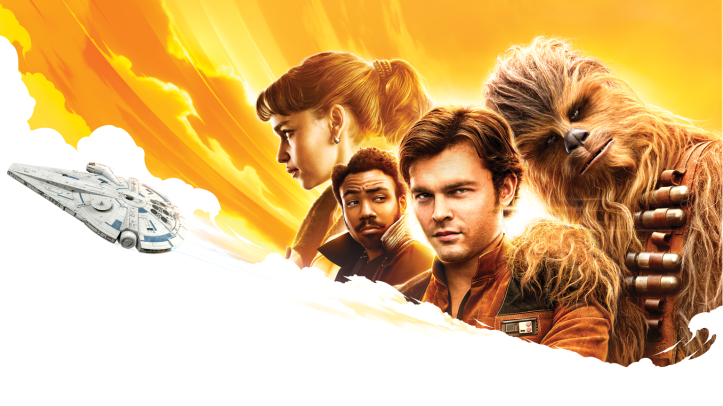 The second of the spin-offs set in a galaxy far, far away, this time rewinding to his teenage years and through to adulthood. We know that he, and his new friend Chewbacca, will survive. The raft of new characters, played by Emilia Clarke, Woody Harrelson, Thandie Newton and Paul Bettany, on the other hand hold question marks over their heads.

Han (Alden Ehrenreich) and Qi’ra (Emilia Clarke) were brought up as petty thieves and criminals, running errands for protection and shelter. Han, executing a long-planned break-out, manages to escape but his love, Qi’ra, isn’t so lucky. Desperate to be a pilot, he joins the Empire but despises the dictatorial expectations and deserts the force, finding Chewie on the way. They conduct heists with Tobias Beckett (Woody Harrelson) and his motley crew. From this point on, we are running alongside the young rascal as he slowly falls deeper into a criminal underworld that has a scarred-villain in Dryden Vos (Paul Bettany) and a best-friend-to-be in Lando Calrissian (Donald Glover).

Unlike Rogue One: A Star Wars Story, this plot requires no baton-passing in the final act. We are not anticipating Han Solo, outside the Cantina bar in Tatooine, saying goodbye to his 2018 friends and telling them he’s going to meet Greedo (“and I may – or may not – shoot him first” [he winks to camera]). Nevertheless, we are expecting a millennium falcon, a dapper Donald Glover in Lando and something-about-parsecs-and-Kessel-runs as particular highlights. From the trailer alone, these are all openly celebrated; crucial elements of Solo: A Star Wars Story.

But, while Rogue One felt like a welcome detour in the saga, Solo doesn’t hold the same appeal. It is built on the shoulders of a character we know intimately well, and explains situations we never knew were so key to his character. What was a joy to watch in Rogue One was the diverse crew who would, only in the final moments, connect to the series. Granted, Vader popped up, but Mendelsohn’s Krennic was the real baddie. Solo is a constant acknowledgment of Harrison Ford’s character, and the story, as fun as it may be, holds no purpose outside of the “wouldn’t it be cool if we saw…” attraction that kids will enjoy.

But surely kids may struggle too. One generation saw Luke, Leia and Han as heroes. Another generation witnessed Anakin, Obi-Wan and Padme shape the future. Kids today embrace Finn, Rey and Kylo-Ren. Han Solo is an old, dusty character who never needed to be carried, kicking and screaming, into the modern Star Wars universe. He had his arc and many more stories are waiting to be explored. Solo: A Star Wars Story reeks of a shameless cash-grab by Disney and a to-the-letter fan-made celebration of Han Solo. Han was never the lead role in Star Wars and Solo falters in confirming whether he should have ever been.

This review was originally published for Culturefly.co.uk in June 2018