In a world where Spectre has spoiled the 007 charm, Stratton desperately wants to be the new British hero. Dominic Cooper, with his dark good looks and spy-like demeanour, cannot help but recall James Bond. 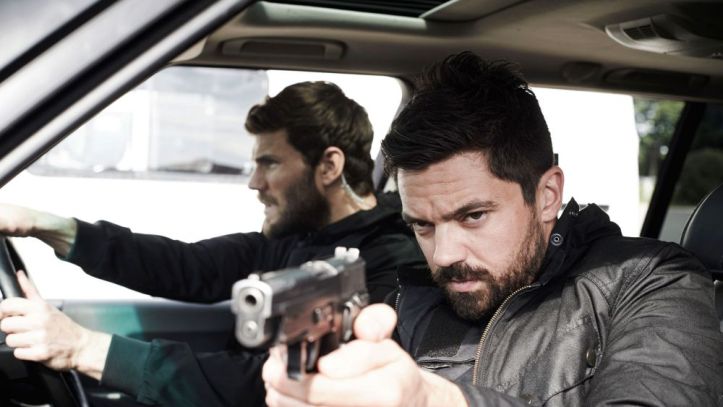 Based on the Duncan Falconer book series, John Stratton is a member of the SBS: the Special Boat Service commandos. They are an actual elite group of military operatives who work for the government and conduct their missions underground. This Special Forces group is attached to the Royal Navy and they’re experts in their maritime, amphibious and riverine environments.

We begin on a minor mission as Stratton (Cooper) and Marty (Tyler Hoechlin) showcase their abilities, with direction from a small team (Gemma Chan, Tom Felton and Jake Fairbrother). Unfortunately, the plan does not work out and they regroup in London. Through careful investigation and analysis of the footage caught, the team realise the man they are hunting is Grigory Barovsky (Thomas Kretschmann), a rogue agent leading a terrorist cell that plans to bomb a major populated city. Stratton’s boss, Sumner (Connie Nielsen), pulls everyone together and sets the group on Barovsky with explosive results.

With a considerably lower budget, Simon West’s direction cannot match the expense of Bond’s fifty-four-year-old franchise. This means that explosions, shoot outs and locations are nowhere near the quality and scope of the super-spy. The opening sequence is the highlight of Stratton and then it’s all downhill. But even these moments owe a debt to Goldeneye, with the industrial setting, Russian villains and two-agent bomb set-up requiring only a “buy me a pint” quote before becoming parody. As your mind drifts off, you realise the multitude of film reference-points and wish you were watching them. A sequence in Rome (one of two locations – the other is London) begins with a similar look to Mission: Impossible’s unforgettable Prague act. Then there’s the uptight “M” character. Nielsen couldn’t be stiffer while Stratton only cracks a smile as she ticks him off and explains how the Prime Minister isn’t happy. We’ve seen it all before.

In a Thames boat chase, Stratton speeds after the villain and approaches the Glengall Bridge, near Canary Wharf. When James Bond approached the exact same bridge in The World Is Not Enough, he dived under the water, fixed his tie, and popped back up on the other side. It’s witty, playful and exciting. Stratton, in contrast, stops and loses the bad guy. This sums up the glaring issues in a film that was too ambitious from the outset – if Stratton isn’t likeable, then why do we watch him at all? Car chases and punch-ups feel slow when they should be anything but.

Contemporary action megahits that worked with small budgets, such as The Raid or Free Fire, limit the story to almost one location and funnel all their efforts into the relentless shoot-outs and hand-to-hand combat. Stratton could’ve pulled back and saved the globe-hopping antics for the sequel. Instead, there are cringe-worthy clichés in an attempt at matching its expensive influences. This includes a dead man’s phone ringing with wife-holding-newborn picture on the screen and an awkward bomb-on-the-bus finale; both elicit laughter when we’re supposed to be tense or excited.

Interestingly, Stratton originally had Henry Cavill attached to the script. Cavill, the real Superman and a popular choice for 007, left due to “creative differences” with the writing (penned, in part, by author Duncan Falconer). Suffice to say, the screenplay forces this pseudo big-budget romp on the filmmakers, who are clearly restricted in what they can do. Derek Jacobi, as Stratton’s likeable canal-boat friend, provides a few laughs, but most of the guffaws are due to bad writing, anticipated banality and dull action beats. Stratton leaves you cold and wet, and though that might be appropriate for a SBS commando, it’s not what you expect from an action film.

This was originally written for Culturefly in September 2017