Your Name – “A sumptuous, charming movie that’ll give hope to the most jaded of teens”

Between Big, Vice Versa and Freaky Friday, body-swap comedies are clearly a big draw to the cinema. The combination of living someone else’s life and realising your own is unique, and to be cherished, is a warm and fuzzy message that can be applied to various time periods and genres to great effect.

Your Name, a Japanese anime directed by Makoto Shinkai, takes the trope and feeds in a smart, inventive romance. On a canvas of wonderful city and landscapes, Your Name carries heartfelt ideas that explode onto the screen in vivid colour and intricate animation. Behind Titanic, Spirited Away and Frozen, Your Name became the fourth highest-grossing movie in Japan of all-time. An enormous accomplishment, Your Name is absolutely worth seeking out.

Mitsuha (Mone Kamishiraishi) wakes up in shock. Not sure where she is, she looks down at her chest in amazement – she has boobs! The following day, it appears as if Mitsuha is “normal” again. But her memory of the day before is missing from her mind. Her friends tell her she didn’t know her name or the route to school, and Mitsuha is surprised to discover the message “who are you?” scrawled in her book. Mitsuha continues her day, anticipating a comet due to pass over and frustrated with her father’s mayoral ambitions. As the evening draws to a close, frustrated with her small-town life and the expectations placed upon her, she shouts out “I wish I was a boy!”. The next day, she wakes up in the body of Taki (Ryunosuke Kamiki), a city boy in Tokyo with a school to attend and a job to work in the evening. While Mitsuha helps Taki impress a fellow waitress, Ms Okudera (Masami Nagasawa), Taki realises that Mitsuha isn’t merely a random person – but someone he must help.

Your Name is fantastical and dreamy in its playful storytelling and in its mesmerising style of animation. Using Japanese rock-band Radwimps to pump pop-songs energy into the soundtrack, it is clear that this is aimed at teenagers. The film has to explain the mysterious body-switch that has occurred but Your Name is forced to tackle gender too. Taki, acting as a teenage boy in the vast majority of circumstances, also realises that by touching himself/herself, he is violating someone he has begun to know intimately. His quick temper also leads to a change in her character, as she needs to break free from the shackles of her privileged life. These are subtlety acknowledged without overshadowing the momentum driving the film to its destination. 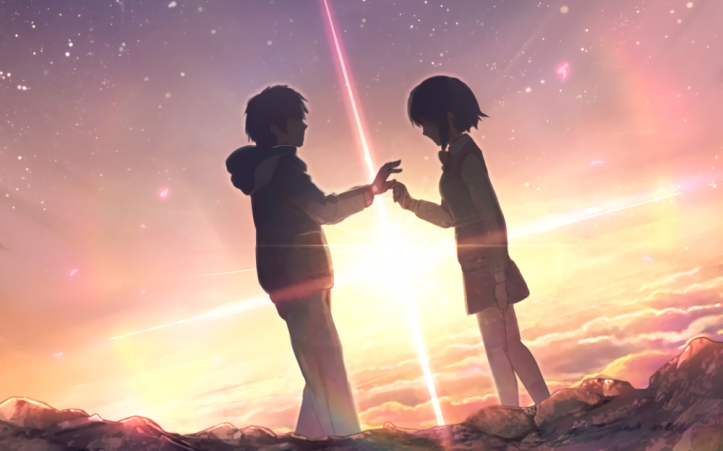 What lifts this supernatural teen flick to even greater heights is the wider range of contrasts that complement the tale in such an effortless fashion. Mitsuha’s town, Itomori, is steeped in tradition. Mitsuha is expected to create Kuchikamizake, a form of sake made by chewing and spitting it out. This is in contrast to Taki’s busy, Tokyo lifestyle, as he sleeps in a small flat with his father and visits café’s if a little bored at lunch. Mitsuha dreams of such a life and this strange event gives her the opportunity to appreciate his world, while Taki is shown how her rural, traditional lifestyle equally has its own share of unique experiences.

Your Name does stumble a little in the final act, as it weaves an intricate plot even tighter with a passing comet and a complicated time-shift. It pulls us away from the likeable characters we’ve spent the film getting to know. The dense, multi-layered narrative possibly earns more credit on repeated viewings but, initially, it detracts from the intimacy of their relationship. Nevertheless, the poetic use of time like a thread – it breaks, bends and reconnects – carries an unexpected weight. Akin to Studio Ghibli’s Only Yesterday, the small story of one girl becomes an extraordinary, profound tale of hope. It’s a sumptuous, charming movie that’ll give hope to the most jaded of teens.