Paterson – “Capturing that nuanced and creative experience of poetry…”

There’s a quiet beauty in people-watching and overhearing snippets of conversations you’ve earned no part in. These stir ideas and thoughts that, with notepad in hand, you can transform into writing of a sublime quality. Paterson captures that nuanced, creative experience.

Set across a perfectly-arranged single week, Paterson’s (Adam Driver) life as a poet, bus driver and lover is revealed. He wakes up and cuddles in the morning, walks to work through old factories that are emblazoned with his name, and ferries others around on their own working day. He returns home, where his black-and-white obsessed girlfriend Laura (the mesmerising Golshifteh Farahani), and sulking bulldog Marvin, wait for his arrival. He walks the dog. He has a pint in his local bar and chats to the bartender, Doc (Barry Shabaka Henley). Each day is almost identical, with subtle variations providing stimulus and curiosity. He doesn’t own a phone and therefore extracts himself from the tech-savvy, modern world. As a poet, a small event becomes prose. His small box of matches, briefly toyed with on the kitchen table, as he spoons through his cheerios, becomes the impetus for another verse. His poems are physically written on screen while he reads them through. He corrects them, tweaks them and changes the way they sound. These inner thoughts of correction show the careful construction of a considered, reflective writer. 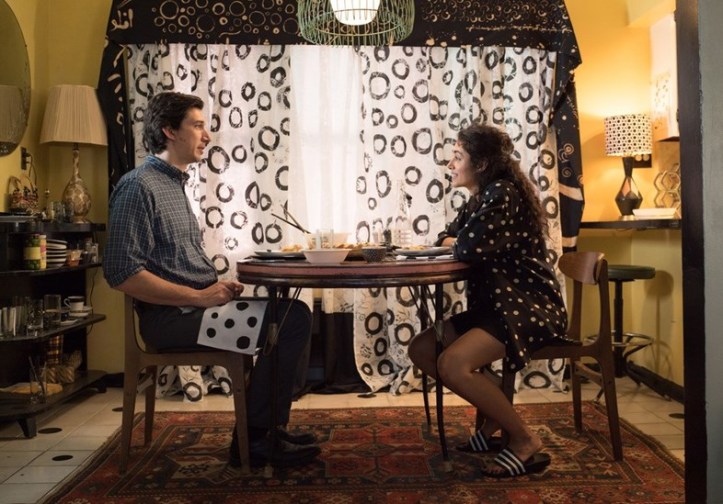 The way that Paterson is both his name and the town he lives within seems to be the type of repetition that we saw in the identical-faces and voices in Anomalisa last year. While it is mentioned and dismissed as mere coincidence, there is something disorientating about how the word is repeated in different places and in different forms. As the sole location on the bus he drives or in passing conversations about boxers and Lou Costello, Paterson is everywhere. But this mundane, everyday town houses artists. The “greats” – Costello (of Abbott and Costello) amongst them – do not define artists in Paterson. Paterson is an artist. Two teenagers, the actors from Moonrise Kingdom, are artists themselves when they talk loudly on his bus about anarchy.

His constantly-creating girlfriend is too. She bakes, paints, decorates and renovates her pieces in monochrome patterns. His work is in a small book. There is something so regular about him, as if we recognise his mannerisms and sweet appreciation of his girlfriend. But he is different as he turns the moments of his life into art. We know the daily rituals. The check of the watch and quick snuggle in the morning, before leaving the bed, when seen on a daily basis, becomes the rhymes and alliteration in his routine. Laura’s obsession with patterns, a kind-of Bridget Riley and Nigel Peake combination, becomes the defining trait of her image; something she takes great pride in. But image is a non-issue for Paterson. Noah Baumbach’s playful While We’re Young featured Adam Driver as a fame-hungry, vain and image-obsessed twenty-something in the iconic New York. Paterson frames the artist as private, sincere and personal, existing in a town that looks like home. This is what’s so charming, and inspiring, about Paterson. The artist is the bus driver or the cake-maker and, crucially, the artist could be you.

This served as part of my coverage for the London Film Festival 2016, for Culturefly