Chess is equal. Whether you are the black or white pieces, you have the exact same quantity of pawns, rooks and knights as the opposing player. The skill is what separates the players in this true story of child prodigy, Phiona Mutesi. 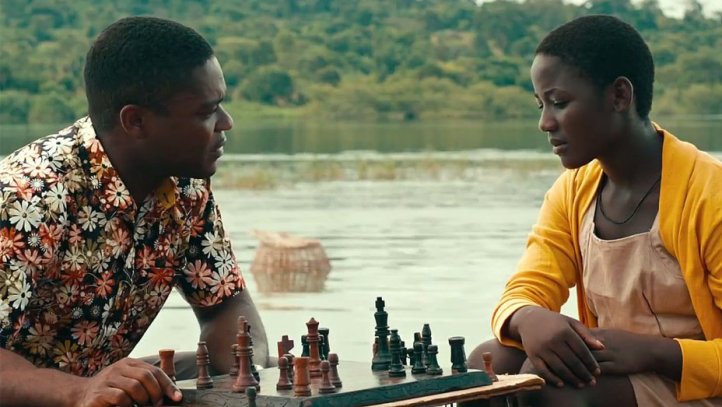 Lupita Nyong’o and David Oyelowo are the name-actors at the front of Queen of Katwe but it is the younger actors, Madina Nalwanga and Martin Kabanza, who make this film such a joy and immense pleasure to watch.

From the poverty of Katwe in Kampala, Uganda, lives a small maize-selling family. The mother, Nakku (Nyong’o) has four children she has to raise on her own. Her eldest girl (Taryn Kyaze) is a tearaway, riding the bikes with older men; her youngest, Richard (Ivan Jacobo/Nicolas Levesque), is permanently attached to her side. But her middle children, Brian (Kabanza) and Phiona (Nalwanga), are energetic, hard-working children. The family cannot afford school and it is only through a chance meeting at the local football ground, that Brian and Phiona join a small chess group called the Katwe Pioneers. Their teacher Mr Katende (Oyelowo) notices that Phiona, and a few others, have a special talent for chess and he commits himself to ensuring that Phiona and her peers have the opportunity, as every other educated boy and girl, to compete in the local championships.

Let’s begin with the expected concerns with the film. It has the anticipated structure of most sporting films as the protagonist is introduced to the skill, excels at it and practices to reach a particular level. There are the matches where she wins and the more-important matches she loses. But in the hustle and bustle of the busy African communities, director Mira Nair paints a picture where the endless, colourful patterns dominate the palette. The dusty heat and bright blues and oranges create a fresh and inviting atmosphere. With upbeat Ugandan pop-music blaring loudly on the soundtrack and laughter filling so many scenes, it is hard not to be swept up in this warm and loving atmosphere.

But there is an ugly side to the slums that Nair refuses to shy away from. Well-heeled men in suits often perceive the slum children as a sort of “disease” they fear might infect their pricey schools. Then there’s the close-to-the-edge life, where one accident or decision might leave you homeless. Subtly, the lure of prostitution to earn money for food or luxuries is even touched upon. These are sensitively handled, and remain at a distance enough that younger viewers can still access the story, without losing the detailed layers that will resonate with adults. Phiona has to believe that “Challenges are not a curse” (as one inspiring message says on the walls of a school she cannot attend) and that “the small one can become the big one”, as a friend explains to her when describing the rules of chess. Her relentless practice, using bent bottle-tops as pieces, is the only way to escape her hard life.

Queen of Katwe is a tremendous joy to watch with performances that deserve Oscar-worthy praise. There are few films that reduce you to such tears of happiness as the credits roll, and set between 2007 and 2012, means that this is only the beginning of the story. These children are still young with the world ahead of them. If I could finger-snap in a review, this is where, while celebrating its wonderful, uplifting story, I’d whip my fingers, and say it’s a *snap* must-watch.