Kubo and the Two Strings – “The intimacy of a Ghibli movie combined with the mesmerising, textured Laika Studio stop-motion technique”

There is something deeply poetic at the heart of Kubo and the Two Strings. Expertly, the themes of family, creativity and grief fold neatly together, akin to the origami creations that our hero, Kubo, is an expert in. 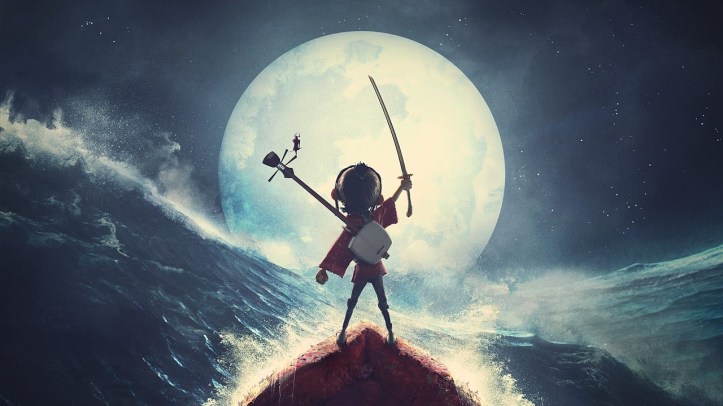 Kubo and the Two Strings holds the intimacy of a Ghibli movie combined with the mesmerising textured Laika Studio stop-motion technique. Made by the creators of Coraline and The Boxtrolls, this is another hit for a studio that is forging a new path in animation.

Beginning with the rising tides of an endless Ocean, the composition immediately recalls Hokusai’s vivid landscapes. Young boy Kubo (Game of Throne’s “Rickon” Art Parkinson) narrates, detailing the story of his upbringing. His mother, with babe on her back, tackled the ferocious sea using her magical three-string shamisen. But it doesn’t stop every wave, and another capsizes the small vessel. Her head hits the stones underneath and they are both washed ashore. Kubo, the baby on her back, cries underneath a red gown that’ll become his when he grows older. The story shifts ahead and it’s revealed that Kubo has taken care of his mother ever since. The head injury has affected her memory: she sometimes forgets things; she sometimes needs Kubo to lift her in the morning and lay her down at night. By day, Kubo ventures into the local town and wows the villagers with his musical talent and magical origami, paper-creatures. But, on the hunt, are his two aunts (Rooney Mara) and grandfather (Ralph Fiennes). They are keen to find Kubo and kill his mother. We are told they have killed his father already and are responsible for his missing eye. One evening, after calling out for his father, his extended family return and he has to run away and complete a quest to defeat them. Thankfully, he has two animals by his side and a mute paper swordsman: the monkey (Charlize Theron) is stern and serious while the beetle (Matthew McConaughey) is a charming, expert-archer, samurai. The adventure takes off… 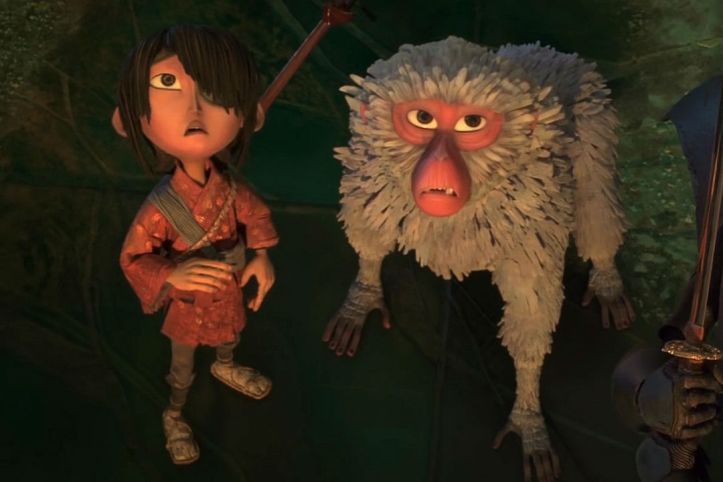 An enormous achievement, Kubo and the Two Strings is an original story by Shannon Tindle, with a screenplay by Marc Haimes and Chris Butler. Kubo oozes culture and feels like an old, traditional story of Japan. The profound connection to old-age and mourning is not unlike the mature themes that Isao Tahakata would explore in his Ghibli masterpieces Grave of the Fireflies and The Tale of Princess Kaguya. Considering Laika are responsible for The Boxtrolls, Coraline and Paranorman, it comes as no surprise that the themes resonate with adults and children alike. For their 4th film, this confidence in storytelling, where the narrative compares favourably to Arthurian fables and Japanese folklore is extraordinary (It is worth noting that The Lion King was the first Disney animated feature based on an original story). But it’s not without its influences, of course. Kubo and the Two Strings, at times, plays like The Legend of Zelda, where a sword and shield are vital accessories for the heroic Link. Kubo, like Link, is on a quest, completing mission’s on-board boats and in various terrains. A showdown between Kubo, Monkey and Beetle against a towering skeleton particularly evoked an end-of-level boss.

None of this should detract from the enormous, thumping heart that’ll reduce you to tears in the final act. Those who have seen Uberto Pasolini’s outstanding Still Life may see an unexpected connection. In fact, a samurai showdown even seems reminiscent of Lady Snowblood (or Kill Bill). Directed by Laika CEO and President, Travis Knight, Kubo and the Two Strings proves how the studio is in more than safe hands. If this is how impressive his directorial debut is, we can expect magnificent things for the future. Hunt down Kubo and the Two Strings and don’t blink for a second.