David Brent: Life on the Road – “If you like him enough, you’ll forgive its faults for the fun of hanging with him again”

There is a generation who have had their lives altered by David Brent. Men and women, who will run their hand through their hair, fix a pointing hand on top of their head and say “I can make that dream come true to AKA, for you.” David Brent has a charm that audiences took to their heart; where, through imitation, fans could evade embarrassing moments and be met with a laugh.

Two series and a Christmas Special of The Office will remain the peak of Brent’s tenure. But our appetite couldn’t be abated, and between Comic Relief specials, YouTube videos and a cameo in the long-running US version of The Office he never really left us. David Brent: Life on the Road is, nevertheless, his biggest return since the original series.

Unfortunately, Life on the Road is a disappointment. Though it isn’t a crushing travesty, it is clear that something special is missing. Crucially, it’s not David Brent. He feels like Brent in 2016. Still awkwardly laughing at himself, and keen to maintain some sort of fame, this is David Brent desperately appearing on camera. But Life on the Road is almost not a mockumentary at all, often shifting camera throughout his music tour in a manner that doesn’t entirely seem possible. Thankfully, the film is bookended by scenes within a sales office. These seem to make the most sense and feel comfortable. Brent, in an office environment, whereby his surrounding colleagues haven’t chosen to be with him, is what makes sense. There’s room for a range of characters, and the most likeable, poignant and despicable people all exist in this office. But the bulk of the movie is ‘on the road’.

By ‘on the road’, it’s a joke unto itself that this is within a few miles of Slough and Reading. It doesn’t make an enormous amount of sense that Brent sticks within such strict boundaries but it gives his band members and production team a reason to mock him. Outside of rapper Dom Johnson (Ben Bailey Smith), they all seem to be an unlikable group of musicians. Indeed, they’re only with him for the money, and isolate him at every opportunity. He drives behind the tour bus. He has his own hotel room. He is handed his own dressing room. When he tries to get involved, the group all sit muted, in arrogance that this ‘gig’ is beneath them – except Dom, who is the closest thing to a friend he gets. The Office wasn’t a joy due to the employees of Wernham Hogg picking on him – Gareth has his fair share; Tim and Dawn humoured themselves often out of his earshot; we laughed at the off-camera irritation caused by his incompetence. The young hipsters on the tour, in contrast, simply don’t care and by excluding him, they exclude us. 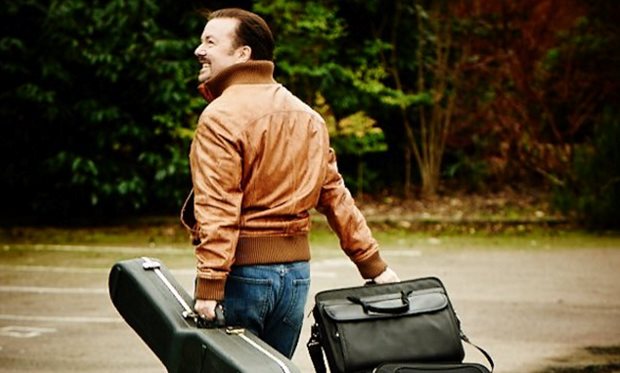 Notably absent from the writing and producing is The Office co-creator, Stephen Merchant. Life on the Road, I assume, may be Gervais doing his shtick but without Merchant including the thumping heart that evolved in the background of The Office. For example, Brent’s production manager, Dan (Tom Basden), moans and resents Brent throughout yet reveals how he “likes” him in the final act. It doesn’t gel and feels entirely false. After an hour of cruel, bordering-on-bullying treatment, any redemption for the band is difficult to appreciate (I doubt, post-tour, any of them would see him again). Brent returning to the office is better, but it’s not clear what he – or we – have learned by the end. Should he have gone on tour (at the loss of £20k)? Should he have been happier in his job and noticed those who care? Is it a “follow your dreams, whatever the cost” finale? There is a single scene whereby David Brent explains how he’s struggled with depression and had a low-point a few years prior. This was powerful, and it could’ve fed nicely into a wider issue on the modern man finding happiness in this crazy world. Alas, it doesn’t, and Life on the Road only gets by on your relationship with the Brentmeister General. If you like him enough, you’ll forgive its faults for the fun of hanging with him again. I have a feeling that not everyone is as forgiving.

Nb – I’m sure there would’ve been space to include some of the old gang. Chris Finch (“bloody good rep”), Gareth, Tim & Dawn, etc, would’ve surely made the most of catching Brent “on tour”.