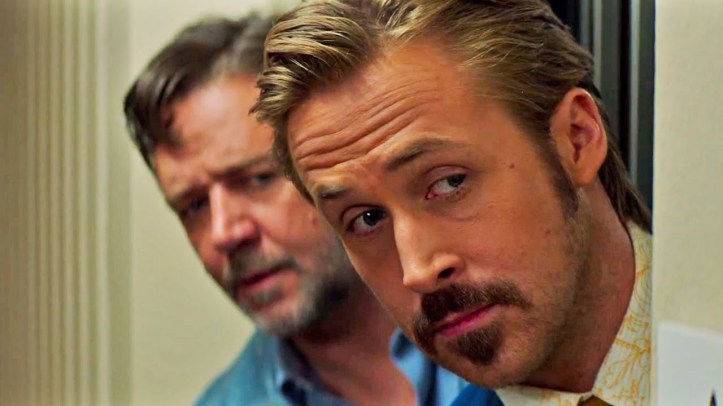 Capturing a glossy 1977, The Nice Guys looks terrific. It’s got style and oozes class before hire-to-punch Russell Crowe and clumsy Ryan Gosling (the worst Private Investigator in LA) team up. After the explosive murder of porno movie star Misty Mountains (Murielle Telio), the hunt for friend-of-the-deceased, Amelia (Margaret Qualley), begins. Between sordid poolside parties, grimy bars and brown airport hotels, Holland March (Gosling) and Jackson Healy (Crowe) are unceremoniously stuck together to figure out the case. Director and writer Shane Black is experienced in this style of action-come-buddy comedy, after the enormously successful cop caper Lethal Weapon, penned by Black in 1987. But, unlike Riggs and Murtaugh, Healy and March aren’t easy to like. March could be considered a tragic figure with his love of liquor but, instead, it seems that his main purpose is for laughs. His smart daughter (Angourie Rice) often pieces the puzzle together leaving the comic duo somewhat redundant. You may find their banter and japes hilarious, and often, they are. But sadly, there’s no depth beneath the surface. The setting looks cool and the dynamic is fun but the playful chemistry between Gosling and Crowe is built on sinking foundations and by the final credits, though enjoyable, The Nice Guys is unfortunately forgettable.