Eye in the Sky toys with your belief systems. Between the all-star cast, location-hopping military plot and nail-bitingly tense situation, your position is challenged. Perhaps a decisive, experienced soldier will watch Eye in the Sky and scoff, annoyed with the lack of pace as between Whitehall MP’s, drone-pilots and undercover men on the ground, a decision has to be made and, as Tony Soprano said, “more is lost by indecision than by wrong decision”. 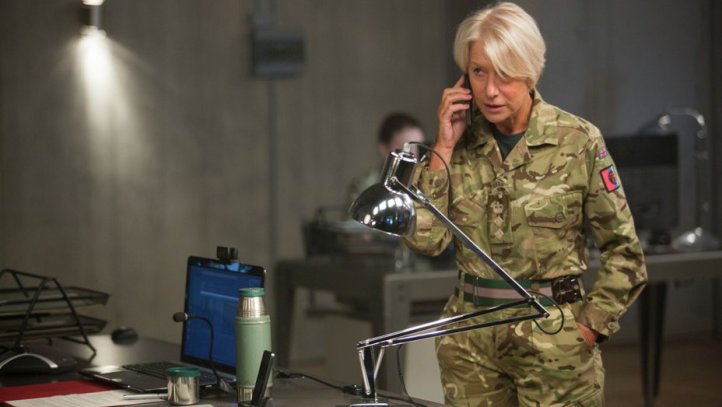 But few can be so dismissive when an innocent human life is on the line. The refusal to argue one position over another in Eye of the Sky means that the protocol followed (and “what-if’s” that spiral out of your mind) feeds an important discussion that everyone needs to consider.

Beginning in Surrey, Colonel Powell (Helen Mirren) wakes up, unaware what the day has in store. She has been tracking a terrorist cell for six years and today is the conclusion of all her hard work. Receiving an email from her Lieutenant Benson (Alan Rickman), it transpires that an undercover operative in Kenya has been murdered by an African terrorist organization. The radicalized group of Somali and UK-nationals responsible for tragedy across Africa are meeting together, she suspects, to prepare for another suicide bombing. Benson, based in London, gathers the appropriate government officials to oversee the military action required. Across the Atlantic, in Nevada, US drone pilots Watts (Aaron Paul) and Gershon (Phoebe Fox) are supporting the UK with their objective. Among the terrorists, landing in Nairobi, are young American citizens, radicalized themselves and due to join the rebels. In Kenya, also, are the team on the ground, informing the UK and US further in their capture of the British terrorist. These undercover agents (Among them, Captain Phillips’ outstanding Barkhad Abdi) have state of the art technology including tiny cameras that operate as James Bond would operate his gadgets from Q branch. 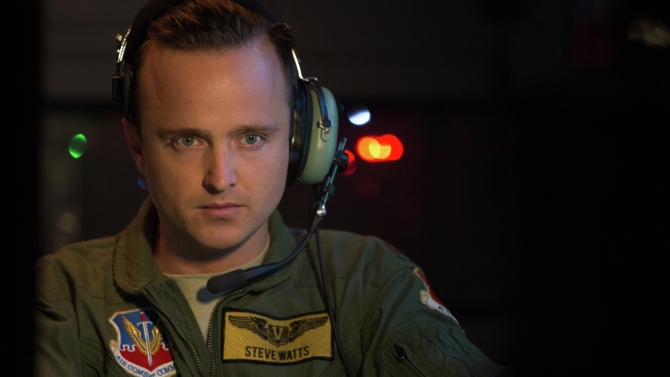 Inevitably, the situation changes and the capture mission becomes an assassination. Director Gavin Hood successfully jumps between each location smoothly, and we’re never left in the dark as to what is happening. This is a complicated story to tell but it has a clear through-line as we’re in the same position, having to consider what you’d do in such circumstances. As the day unfolds, the pace of the action is akin to Paul Greengrass’ United 93; of course – this could be a true story but pehraps without the classy technology. Thankfully, the beetle-cameras and bird-flying surveillance is used only to support the story, and though it sometimes feels like a stretch too far, I’ll bet it either exists or is-close-to-existing already. The technology is state-of-the-art and the soldiers and professionals are all at the top of their game. In many respects, nothing entirely unexpected happens and instead we see how complicated such high-ranking decisions are. One key event, that suddenly throws the entire mission into turmoil, isn’t a far-fetched notion or mad ‘twist’ in the plot, it is more an inevitable occurence. The terrorists are blissfully unaware of the surveillance and the observers merely respond to what is happening on the ground. The situation that unfolds is nerve-wracking but Eye in the Sky expertly realises a military situation rather than presenting a rare, ridiculous event. At the end, as anticipated, the pilots navigating the drone go home and get ready for another shift twelve hours later.

The multi-layered narrative plays like The Wire, whereby key characters never communicate but they all impact on each other’s’ actions. Aaron Paul and Phoebe Fox, as drone operators, are perhaps a little too misty-eyed to do the job they’ve been trained to do, but they only represent our own feelings. Again, a “what if” emerges and we consider a more gung-ho pilot, shooting to kill on the first opportunity – but then we may be less reflective of our own position. Eye in the Sky is about tackling our fears. Our fear of drones and our fear of what happens behind closed doors. It lightens the tone with some ribbing of the government officials but it supports the broad range of issues it presents. Eye in the Sky is one to track down and observe carefully as you’ll be talking about it long into the night.