The Man Who Knew Infinity smells glorious. A mathematically meaty subject in the vein of A Beautiful Mind, flavoured with the rags-to-riches, Indian backdrop of Slumdog Millionaire and topped off with a dash of The Theory of Everything’s true-story, Cambridge roots.

Starring Dev Patel as the impoverished genius of Madras and Jeremy Irons as the gravelly voiced scholar, this is a tale that proudly champions the value of education and stands in awe of the teachers of the past. Unfortunately, The Man Who Knew Infinity has little else to champion with a difficult relationship at its core and a muddy backdrop of wartime always lurking at the edge, teasing a threat that never comes to pass.

Set in 1914, Srinivasa Ramanujan (Patel) is a Mathematical whizz, scribbling theories and equations on the floor of his temple. Desperately seeking a job, a likeminded recruiter takes him on with the promise that Ramanujan teaches him his theories. But these ideas have potential and are an exciting prospect, not least in proving how an Indian mathematician can be equal to the arrogant English of the era. His intelligence takes him to Cambridge, pulling him away from his newly-wed wife and demanding mother. Under the wing of noted Cambridge fellow, G.H. Hardy (Irons), Ramanujan flourishes but struggles to balance his creative understanding of mathematics with the formal expectations of the university. Ramanujan has to understand his cold sense of process as Hardy demands that ‘proofs’ are provided to back up his claims. Ramanujan’s research even reveals a new theory on partitions, something considered impossible to crack. But War breaks out and pressures mount as Ramanujan has to contend with racist abuse and discrimination from the University itself. He misses his wife and craves the flexibility to be lost in the numbers he loves so much. 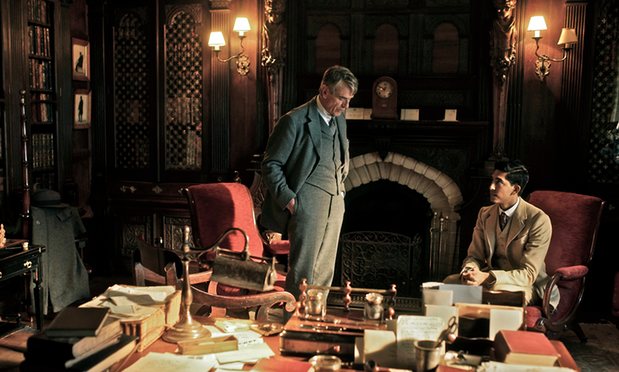 The clear inspirations for this stretched-out story are obvious, but where they succeed, The Man Who Knew Infinity fails. The vivid use of equations and symbols in A Beautiful Mind pulled you into John Nash’s head. Slumdog Millionaire had an electric pace, frenetic and powerful, as we cheered on Patel’s break-out role. The Theory of Everything had the snarky wit of Professor Stephen Hawking with a romantic relationship at its core. The Man Who Knew Infinity has Ramanujan’s marriage, but it is so distant to the issues in Cambridge it’s difficult to be drawn into their struggles. Hardy and Ramanujan’s friendship too is difficult to crack, as Ramanujan is quiet and Hardy is equally blunt and harsh, pushing Ramanujan to his limits to achieve the very best. To blur the story further, The Great War takes place in the same era and though pertinent, it confuses the key issues and becomes an unnecessary addition to an already difficult-to-digest story.