Jean-Luc Godard’s sci-fi film noir, on a budget, is Alphaville. Pre-dating 2001: A Space Odyssey’s unforgettable HAL9000, and the sinister machines of Alien and THX-1138, Godard knew what we feared.

In 1965, technology and shiny, imposing architecture was the threat. We now know, fifty years into the future, that technology has fulfilled its promise of innovation and progress. With cinematic offerings of Ex Machina and Avengers: Age of Ultron in 2015, it seems as if the power wielded by computers remains a sinister part of modern society. Godard remains relevant and uses Lemmy Caution, “Secret Agent”, to save the day.

Set in a monochrome dystopia, Alphaville uses urban Parisian streets and endless offices to depict the loveless society. Indeed, Alphaville is ruled by a “logical” system named Alpha 60. Overseeing the city in its entirety, Alpha 60 has outlawed elements of humanity deemed nonsensical. Emotion, mourning and love are all out. A cold, heartless world is an alien world: inhuman and broken. Lemmy Caution (Eddie Constantine) is undercover, sent from The Outlands, with three objectives. He needs to find his missing colleague Henry Dickson (Akim Tamiroff) and kill the architect of Alphaville, sunglassed Professor von Braun (Howard Vernon). His final objective is, of course, to destroy Alpha 60 itself. His entire mission is immediately compromised by von Braun’s daughter, Natacha (Anna Karina). Though she has never met her father, she is beautiful and Caution is besotted. 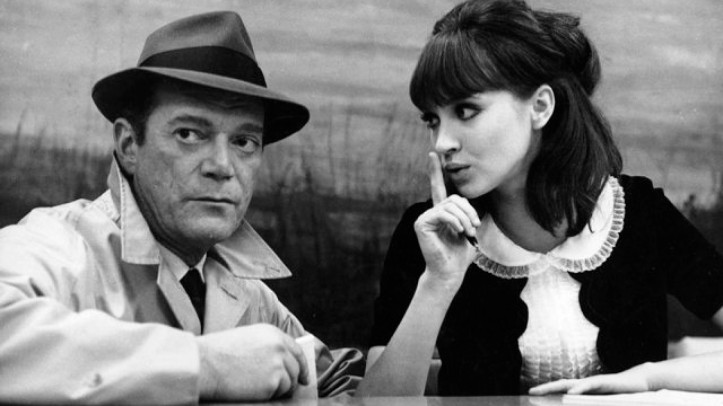 It is crucial, when watching Alphaville, to be aware of Godard’s current status. Godard and Anna Karina’s relationship, including marriage, lasted six years. Divorcing after Karina was unfaithful, Alphaville was filmed afterwards. The man holding the camera was in love with the woman in front – and the romance was over. Before even watching a single frame, this is a film steeped in intimacy and personal sadness. Capturing close-up shots of Anna Karina’s face, dominating the screen with her gorgeous eyes, one can only imagine his heartbreak. The staunch charisma of Lemmy Caution reveals the conflict of masculinity as, though a brute (pulling his briefcase away from help; forceful and pushy with others), he is horrified by the idea of a world without poetry. He reads Paul Eluard and discusses “conscience” and the question “why?”. Though physically brutish, this appreciation of art isn’t primitive whatsoever

We’re told how fifty men are executed to every one woman after breaking the rules of Alpha 60. Godard has no shame in reminding us how emotionally charged men of the world can be (and interestingly, suggesting that women are accustomed to hiding/lacking emotion). The death squads aren’t Blade Runners or robots, but come in the form of swimming pool rituals. Men walk to the end of the diving board, confessing their sins, before being gunned down. Falling to the water, synchronized swimmers artistically remove the body. Alpha 60’s dark, robotic voice (created by a man with a voice box in place of his throat) booms throughout Alphaville, barking its ethos and questioning others. Is it transmitted across the city to keep people in check? Or a narration?

Women, in Alphaville, are those under scrutiny. The first woman we meet, “Seductress, third class”, follows Caution into his hotel room. She offers tranquilisers and invitingly walks around in her underwear and takes a bath. This scene, at the start of the film, is a gateway into Godard’s tone. Though inspired by Murnau’s Metropolis and Cocteau’s Orpheus, Godard (as usual) holds tongue firmly in cheek. Lemmy Caution is an Americanised stereotype, fedora secured on his head and with a long trenchcoat, he looks like Rick at the end of Casablanca. He shoots as James Bond in Dr No, but he shoots each breast on a centerfold, held by the seductress above her head,  a la William Tell. Alphaville treads that line between seriousness and farce. Natacha and Lemmy head off into the night (into space? into the galaxy?) and he tells her to not look back, reminding her that only tapping into her emotions will set her free (and destroy Alpha 60). Godard needed to hear it, and we need it too: “I love you”

The Jean-Luc Godard season runs at the BFI Southbank throughout January and February. Click here to purchase tickets.

This was originally written for Flickering Myth