George Miller has changed the rules on sequels. Prior to Mad Max: Fury Road’s theatrical release in May, our highest expectations of a sequel was an engaging plot via returning characters and thematic nods, that simultaneously reinvent and call back to the previous films. 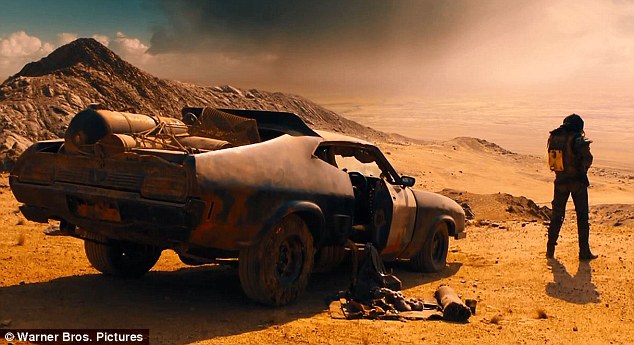 For all its faults, Jurassic World managed to balance this expertly. Proudly, George Miller doesn’t have a Mel Gibson cameo. There’s no throwaway line referencing the Thunderdome or post-credits sequence revealing the ‘true identity’ of Hardy’s Max (As the opening titles state, he’s not the feral boy in Mad Max 2 and is clearly credited as Max Rockatansky himself). George Miller returns to an updated Mad Max dystopian environment but plays out a bold, brilliant new story.

The tale is simple. Mad Max (Tom Hardy) is a lone wolf, stalking the barren desert in a desperate attempt to survive. Memories of the loss of his daughter haunt him and the grind of gears only remind him of heartache: a world long gone in the distance of his wing mirror. Pale white figures raid the landscape and, within the opening few minutes, they capture Max. But the story is not Max Rockatansky’s. This honour goes to Imperator Furiosa (Charlize Theron), a demon war tank driver, on a quest to free the captive breeders from the grotesque Immortan Joe (Hugh Keays-Byrne). Her mashed-up truck, a combination of vehicles and rusted metal, is a clear nod to Duel, and it steals the show. Furiosa goes rogue, but she’s pursued by the animalistic ‘War Boys’ who are fully intent on dying, with mouths gleaming in chrome, to achieve their goal. Among them is Nux (an unrecognisable Nicholas Hoult) – with Mad Max, chained up to the front of his machine. Heading to ‘The Green Lands’, the chase, and race, is on in a mesmerising clash of enormous mechanical monsters and non-stop action. Mad Max: Fury Road is one of the best films of 2015, and we’ll be reminded when the end of year lists appear in a few months. 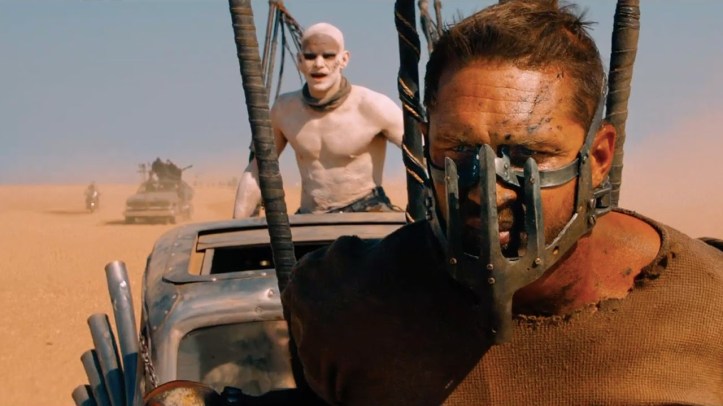 Tellingly, Fury Road has challenged viewers. Gender arguments veer between pro-feminist heroic rhetoric and misogynist-in-disguise movie-talk as, excluding Furiosa, the ‘breeders’ are still the sexy little ladies you’d see in most Hollywood trite (“The camera caresses acts of violence in the same way it caresses the brides’ bodies.” Says Anita Sarkeesian of Feminist Frequency). George Miller didn’t write the film as a call to arms or as a purposefully pro-women film, it simply fell into place that way. The road movie, transporting captive mothers out of harm, had to be led by a woman – “it’d be a very different movie if one man was taking women away from another man” says Miller. But we cannot deny how Furiosa, in particular, is a powerful role model. Maybe it’s Charlize Theron’s character (as Miller tells us it was Theron’s idea to shave Furiosa’s hair off – “the character wouldn’t mess with hair”) or the one-week on-set support of The Vagina Monologues author, Eve Ensler. However you look at Mad Max: Fury Road, it’s unconventional and deeply refreshing to see such an anticipated film embraced by so many.

For all the discussion about gender, the conflict is not unique to the female characters. In my mind, Max is still the central character as it is he who has to change his masculine survival-techniques to succeed. The outstanding opening sequence as mano a mano, he slugs his way through the clawing pale War Boys, leads to failure. Miller describes him as “a wild animal, trapped”, and this could play as allegory in correlation to the many men who feel robbed of their manhood in 2015. An interesting fact is how the biggest killer of men between 18 and 50 is suicide. Max nevertheless maintains his aggressive, independent demeanour in order to survive. But everything changes when he witnesses the important role women (as sisters together; mothers of children) have for the future survival of humanity. Max, arm in arm with men and women, work for the ultimate goal of peace and survival in the final act. And they succeed.

But the dust has settled on the unanimous support of Mad Max: Fury Road. The 480 hours of footage captured, taking three continuous weeks to watch in edit, has been sewn together and the series of Mad Max has been reignited. Rarely does a sequel surpass every previous instalment in such a provocative way.

Mad Max: Fury Road is released on DVD, BluRay and on Digital Download on October 5th 2015