Ronnie and Reggie Kray have become the UK equivalent of Al Capone. East End gangsters, Brian Helgeland’s gangster biopic of the Kray twins seems to glorify and glamorise their 1960’s hey day, while Tom Hardy gives an unforgettable performance as both Ron and Reg Kray. 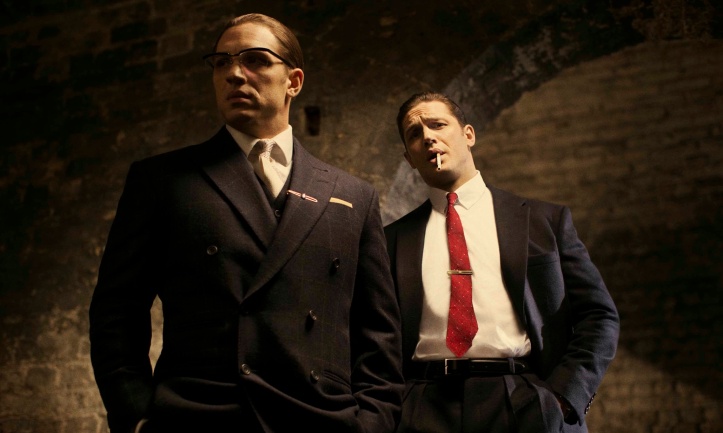 Reg, the charming ladies man, is central, as Helgeland directs Legend from the perspective of his first wife, Frances (Emily Browning). This romance between ‘Frankie’ and Reg is the driving force, therefore establishing a cliché context that only serves to soften the tale told. Unfortunately, Legend is a glossy retelling of London career criminals that’s less Mean Streets and more ‘Soft Streets’, with cockney thrown in for good measure.

To open, Reggie has to spring his brother from Broadmoor Mental Hospital. Their unconventional methods of release mean that the medication Ron’s on is forced onto Reggie to administer as they exit. But Reg has other things on his mind after falling hard for his driver’s sister, Frankie. All gooey eyed and sweetly romantic, Frankie is sure she’ll be able to make Reg go straight. Ron, on the other hand, openly prefers men. “A giver, not a receiver” because otherwise he’d be a “faggot”, he explains. Ron’s glasses sit firmly on his nose, his mouth slightly open while his eyes adjust from sensitive to searing stare in a heartbeat. In one confrontation, the Krays visit rival gangs territory in South London and, while claiming that they’ve arrived for a shootout, they then proceed to bash and smash their opposition with glasses and hammers. The Kray’s are vicious killers, and Frances is going to struggle turning her man around.

Despite this commanding, and arresting performance from Hardy, the filmmakers unnecessarily squeeze in unnecessary framing devices and plot-points. The flat character in Frankie seems unimportant and lacks heart. Why a movie that is primarily exploring the relationship between two brothers is described by a wife who despises one half of the sibling duo, is unexplained. Benjamin Lee, of The Guardian, rightly notes how her narration often explains events that she was not even witness to. There is a brief subplot regarding the Kray’s connections to the Las Vegas mafia and in particular with Meyer Lansky. This extraneous detail seems to only exist in order to link the boys with their infamous US counterparts. A key facet to the history or an cash-in on the US market?

But despite the multiple flaws to Legend, there is an energy and almost pantomime fun to be had in the duality of the two twins. Hardy’s performance is often comedic, as Ron plans to set up Enugu (‘Utopia’) in Nigeria. His frank explanation to Lansky’s goon regarding his sexuality is another memorable moment. Hardy’s charming Reg comfortably balances the madness in Ron. The two seamlessly exist in the world together, and a momentary tap on the knee breaks down the special effects we know are at play. But honestly, there is a frustration that Legend isn’t grittier. Rated 18, this could be Fight Club via Sexy Beast. These are conflicted bad guys, but the smart dress code, witty remarks and often intelligent business dealings raise the Kray’s (Reggie in particular) up on a pedestal awkwardly. Legend is hardly the best of British cinema, but it’s a fun ride that only after the credits roll leave you aching for something much stronger.

This was originally written for Flickering Myth