Where were you in 1995? It’s weird to imagine Katie Holmes watched Mission Impossible in 1995 like all of us. Young, impressionable and excited by the new action film with Cruise at the centre of it. Then, ten years later, she’s married to him and giving birth (without drugs) to his child.

In 2015, almost twenty years since the first IMF outing, we’re at the fifth instalment, Mission Impossible – Rogue Nation. Things have changed, and the series has changed with the times, so to compare each film is a tricky challenge. Of course, it’s all down to preference. Do you like balls-to-the-wall action (M:I-2) or gun-less espionage (M:I)? Do you like deadly serious stakes (M:I-3) or comedic banter to lighten the mood (M:I-4)? Helpfully, I’ve whittled it down to simple pros and cons – the big question hovering over the series is whether latest instalment is the best offering…

Pros – It’s set in Australia. James Bond, in over 50 years and over twenty films has never visited Australia or, for that matter, New Zealand (Despite casting an Aussie in George Lazenby). Opposed to the European class of Prague, M:I-2 is all about bangs, bikes and both hands holding guns. Directed by John Woo, this sets the standard for directors to the series. It’s as if Woo didn’t even watch the first film before pulling out his Face/Off script notes and recreating M:I-2 in his style. It is absolutely barmy, as cars symmetrically spin and motorbikes symmetrically smash into each other throwing the two bodies spinning to the sky like a physical yin-yang sign. At the very least, Cruise solo-climbing in Moab, Utah within the opening remains awesome.

Cons – This film, opposed to the latest instalment, is incredibly sexist. From Anthony Hopkins claiming Nya has all the skills to seduce cause she’s “a woman” while Dougray Scott’s villain argues how women are “like monkey’s” when choosing which man to be with. To make matters worse, made in 2000, M:I-2 has dated spectacularly. Slow-motion and Gladiator music (Indeed, Lisa Gerrard on vocals with a Hans Zimmer score) and Matrix shoot out’s is clearly not Mission: Impossible. Woo felt otherwise. This could’ve single-handedly ruined the series as it doesn’t even depend much on a team either. Luther Stickel and Billy Baird watching Ethan Hunt shoot machine guns and walk through pigeons and doves isn’t exactly a mission. And, to top it off, Cruise looks ridiculous with long hair. The only thing worse could be the ‘Chimera’ virus itself, shooting through your veins as you watch. 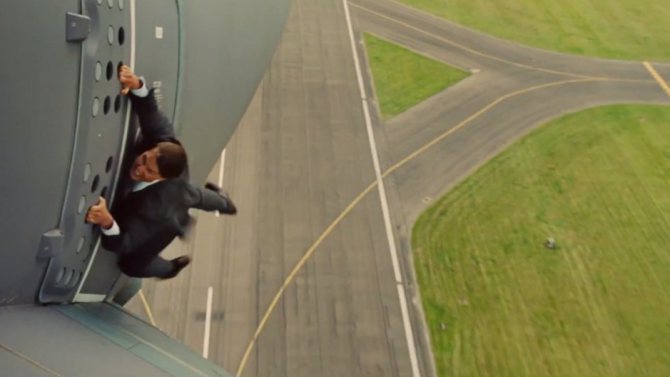 Just because it’s in fourth place doesn’t mean it is atrocious. I still enjoyed the film, I simply preferred the others …

Pros – The opening sequence is short but absolutely unforgettable. The fact that Tom Cruise is actually on a plane is stunt-action on another level. Director Christopher McQuarrie manages to pull back team members (Ving Rhames, Jeremy Renner and Simon Pegg) to make up the team, with only Ilsa (Rebecca Ferguson) as an ambiguous undercover British spy. Nods to Mission Impossible and Ghost Protocol play a part, while a potential shut down of IMF lurks in the air raising the stakes. We’ve seen agents ‘go rogue’ before (arguably, this is the plot of Mission Impossible) but this is not just solving a crime but additionally keeping the entire network of IMF together.

Cons – Rogue Nation loses the teamwork selling point of the series. Ethan Hunt is, initially, a rogue agent for six months before Benji joins him. This creates a two-man show until Brandt and Luther turn up very late in the day. Granted, McQuarrie has acknowledged the previous players, but he has misunderstood the core quality of IMF. Teams. The introduction of ‘The Syndicate’ too – a British organisation – also seems to be ripped from the pages of 007. Mission Impossible – Ghost Protocol actively continues the series with an extension of his marriage in M:I-3 and even an arms dealer who has the same henchman and introduction process as Max in Mission Impossible. Rogue Nation simply ‘has another mission’ rather than continue the story. Surely Alec Baldwin’s character should’ve been Kitteredge from the first film? And with all those disavowed agents and parallel teams lurking round the globe, the opportunity was ripe for a cameo from an ex-member of IMF. Sean Ambrose (Dougray Scott) could’ve popped up! Mission Impossible 5 is all missed opportunity and no pay off. Finally, we all know Puccini’s ‘Nessum Dorma’. Do we really need to hear it at the end of every set piece?

I was honestly not sure which I preferred between M:I-3 and M:I-5. I reflected and, I have a feeling that the warm buzz of M:I-5 is merely because it is shiny. The plus-points of M:I-3 give it the edge…

Pros – What an outstanding cast! Philip Seymour Hoffman (pre-dating Heath Ledger’s joker with his superior, supreme confidence) steals the show, and he rarely turns up. In fact, he’s so good, JJ Abrams repeats a scene to begin the film. There is a clear objective to bring Mission Impossible back to some of its roots. This can be evidenced with themes and codas in the score, the actual team work on display and the clear three-act set pieces – helicopter escape to the Vatican to Shanghai. The outstanding Vatican sequence is an incredible set-piece revealing how they make the masks (something that was always been weirdly easy in previous films) and recreate voices so fast. Abrams shots are relentless, peaking with a camera panning alongside a sprinting Tom Cruise in an exceptionally busy Shanghai. We also find out, at his wedding, that Ethan’s middle name is Matthew. This is promptly followed by the two consummating their marriage in the middle of a hospital, i.e – her workplace.

Cons – Who really cares about the ‘Rabbits foot’? It’s a silly name, for one. Chimera, NOC-list – even the unnecessary ‘Cobalt’ name in Mission Impossible – Ghost Protocol at least sounds cool. Add to this how the immediate opening showing the death of Hunt’s wife spoils the entire film. We know, in 10 seconds, that (a) Hunt’s wife will be pulled into the story, (b) an explosive can kill people via their head and (c) Eddie Marsan will get his nose smashed in. The tension built in sequences leading up to each of these events are spoiled entirely as we have seen it in the opening sequence. In many respects, the ‘heart’ of the film laying in the husband and wife simply seems a little un-Mission Impossible – what next, they have a child and it’ll become a Taken movie? Ultimately, his wife doesn’t die, rendering the entire opening scene irrelevant. In fact, after Philip Seymour Hoffman is out the picture everything that follows destroys the film. His wife is a skilled marksman – and can’t stop asking questions? Ethan will die?! He’s an action hero! Jack Bauer. Jason Bourne. James Bond. They don’t die… unless they get old and retire. M:I-3 went there and missed. 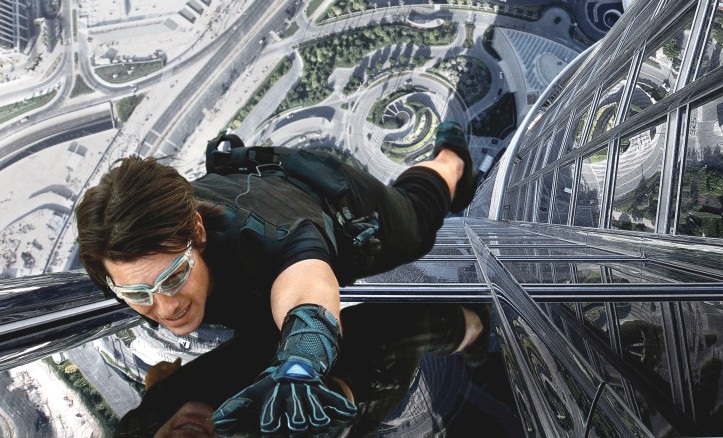 This could’ve easily been my favourite…

Pros – This is a fast moving film. Within the time Mission Impossible conducted a mission in Prague, Ghost Protocol begins in Budapest, breaks Ethan Hunt out of a Moscow Prison, fleshes out the first mission in Budapest and then destroys half of the Kremlin. The ‘Agent Hanway’ opening alone is enormous fun and – as the first film – plays as an exquisitely executed operation that goes wrong. There is no seriousness this time – no Gladiator music or crushing confessions of IMF deception here. Brad Bird plays with gadgets, as we would, with the humour of Simon Pegg returning to add a much lighter tone. Hunt is played as an older man, who’s considered a bit of a legend in IMF. The joy of Mission Impossible is how each film plays after another and the story continues as it seems Ethan’s honeymoon was spoiled by six Serbian killers – paving the way for a solitary life for Hunt and the introduction of Will Brandt (Jeremy Renner). Note, it is Brandt who does ‘the drop’ in Ghost Protocol, not Hunt. The baton is being passed, slowly…

Cons – Luther Stickel is a cameo. This guy was in Langley and Sydney. That deserves a medal – and a key role in every film – unto itself. The villain ‘Cobalt’ (Michael Nykvist) is irredeemably dull. Considering how great Philip Seymour Hoffman was in M:I-3, you’d think they’d have created an equally sinister role. To top it off, the final fight that seems to be set in an enormous car vending-machine. Not only does the fight seem to be too difficult for Ethan Hunt (He’s hardly against an IMF agent here – he’s a slightly over-weight mad man) but the finale manoeuvre, as Hunt drops the car vertically, and barely surviving is nothing compared to the Dubai set-piece. In fact, Hunt doesn’t even kill the villain – Cobalt, inexplicably, kills himself. It peaks in Dubai and never manages to come close to how slick, tense and fun that sequence is for the final hour.

When rating the films, I actually had Mission Impossible – Ghost Protocol on a par with the original. But the dull villain in M:I-4 pulled it down a notch while M:I seems to improve on every viewing…

Pro –  Every action sequence in DePalma’s original is unforgettable. The Prague opening ‘mole-hunt’ – actually, scratch that. The moment marching drums on the Paramount logo fade to Kiev, and Emilio Estevez stares at a monitor is already a highlight. DePalma manages to forge an incredible team, whereby they laugh and joke about coffee and gum. Their banter sets a high bar none of the films have met and it is shook to the core when the majority of them are wiped out. The NOC-list theft at Langley CIA raises the bar higher, with unforgettable performances from Jean Reno and Ving Rhames. Even the dated effects within the Euro-tunnel fail to dampen the quality of Ethan Hunt’s first outing. The varied, international cast and Hitchcockian-plot, as Hunt has to prove his innocence, makes this the bench mark of the series.

Con – A key character in the television series, Jim Phelps, is the villain in this episode so he won’t return. Ever. Special effects are dated, but other than the euro-tunnel, this is choreographed, close and personal hand-to-hand combat. But the technology is very much ‘of its time’. Enormous PC’s (in Langley, for one) and awful internet searching (“internet link” and an email that literally shows a digital letter fly away into the internet ether) are only the highlights of an awkward world that doesn’t exist anymore.

This post was originally written for Flickering Myth in August 2015